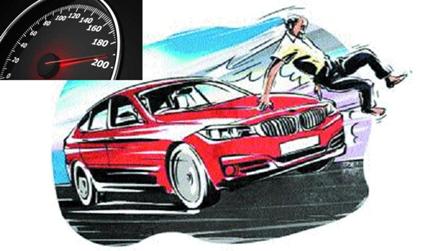 a United Kingdom’s independent road safety charity, IAM RoadSmart, has renewed its call for speeding to become as socially unacceptable as drink and drug driving, after publishing worrying new analysis that indicates excessive speed is considered acceptable on the motorway and on residential roads by many drivers.

The survey found that despite more than one-in-10 drivers admitting to exceeding the speed limit of 30mph(about 49km/h) in residential areas, for almost nine out of every 10 motorists surveyed, speeding in a residential area was perceived as almost as big a threat to their personal safety as motorists driving under the influence of drugs, alcohol or when distracted by social media.

An alarming one-in-10 of the 2,000 people surveyed thought it was even acceptable to go over the speed limit near a school.

Neil Greig, Policy and Research Director for IAM RoadSmart, said: “The results of this survey are deeply concerning. Speeding consistently causes more than 4,400 casualties on UK roads each year.  That’s an average of 12 people a day killed or injured in some form.  We need a fundamental shift in attitudes towards speeding so that it becomes as socially unacceptable as drink and drug driving – where public opinion has changed over previous decades.”

Further findings from the IAM RoadSmart survey also reveal the different attitudes towards speeding in the UK regions.

Motorists in Yorkshire and Humber (65 per cent), closely followed by motorists in the West Midlands (59 per cent) felt that the issue of speeding was more of a problem today than it was three years ago compared to a national average of 55 per cent.

More than a fifth of London drivers (21 per cent) think they drive faster than most others on the roads, compared to a national average of 13 per cent. Drivers in Scotland, Northern Ireland and Wales are more safety conscious while only eight per cent of Scottish and Northern Irish drivers and seven per cent of Welsh drivers rated their driving faster than others.

London was also the region with the highest number of drivers who felt it was acceptable to go five miles over the speed limit near a school, with 15 per cent of Londoners admitting to speeding near a school, compared to the national average of 10 per cent.  Drivers in the east of England are the most responsible motorists outside schools, with only five per cent rating it acceptable behaviour.

Motorists in the south-east of England are most likely (55 per cent) to find it acceptable to speed on the motorway by up to 10 miles per hour over the speed limit, while there was less acceptability among the drivers of the West Midlands and Wales (at 43 per cent and 41 per cent respectively).

Meanwhile, drivers in Wales, where plans have received initial backing to cut the speed limit to 20mph in residential areas, not surprisingly, think it is least acceptable to speed in a residential area.

Neil added: “There is a slight glimmer of hope as, overall, acceptability of driving 10 miles per hour over the speed limit on a motorway has dropped by around 10 per cent since 2016, but there is still a long, long way to go.  Attitudes towards tackling urban speeding are much more positive and support for measures such as speed cameras around schools was very high at 82 per cent.  Overall, however, opinions on 20mph as the new urban limit are still finely balanced with 53 per cent for and 47 per cent against, which shows much work is needed to change deeply entrenched behaviour.

“The findings of this survey also highlight that drivers who responded had a lower opinion of other people’s driving behaviour than they had of their own. There needs to be much greater acceptance of the fact we can all improve our standards of driving behaviour and take action whenever we are on the road to improve road safety.”

The Federal Road Safety Corps (FRSC) in Niger has confirmed the death of three persons in an accident that occurred on Mokwa-Jebba road on Sunday. Mr...
Read more
Road Safety