Massive Shake Up at FRSC, As Corps Marshal Redeploys Senior Officers, Others 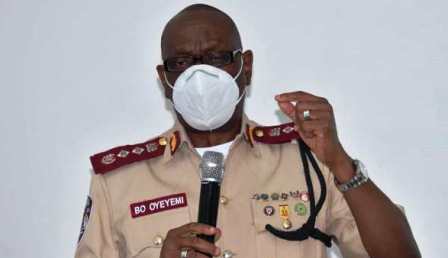 The Corps spokesperson,  Bisi Kazeem, who disclosed this in a statement released on Thursday, described the shake-up as a routine exercise, intended to bolster the system for superior performance and efficiency.

A statement issued last night by Bisi Kazeem, the FRSC spokesperson said the redeployment which is a routine exercise intended to bolster the system for superior performance and efficiency.

“While, ACM EN Obot fsi, erstwhile Corps Commander in charge of Policy Advisory Unit under the office of the Corps Marshal, moves to Command Administration and Strategies (CAS) at the Operations Department RSHQ, as ACM MR Yerima fwc transits from CC Research to ACM Man Power Development,” he explained.

He added that apart from Jos Kaduna, Ilorin,  Benin, Portharcourt, and Jos   Zonal Commands, all other Zonal Commanding Officers remain in their respective Commands of influence.

The Edo Sector Command of the Federal Road Safety Corps (FRSC) on Tuesday said no fewer than 51 lives were lost to various Road...
Read more

The respected auto dealer, Coscharis Motors Plc, a subsidiary of Coscharis Group, has been commended for her commitment to developing local content for its...
Read more

Primero Transport Services Limited, operator of the Bus Rapid Transit (BRT) in Lagos, said that it had sacked no fewer than 300 drivers in...
Read more
Load more