Prayer of a Cat: What the Auto Industry needs from President Buhari 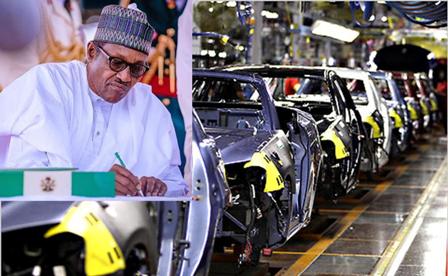 According to an old African fable, a hungry cat normally prays: “Oh God, I don’t need you to provide me any food or meat. All I ask for is to make my environment full of living rats and give me clear eyesight. I can handle the rest.”

In economic terms, what the FABLE CAT is asking for are enabling environment and empowerment, instead of relying on angelic beings for its daily meat provision.

The above is no different from what the auto industry requests from the Nigerian government – mere enabling environment devoid of unfair competition as well as a milieu that opportune the industry to maximize its annual estimated 600,000 capacity utilization.

For the benefit of the road side economic advisers in the Nigerian Finance Ministry and Nigerian Custom Service (NCS), let’s use an elementary illustration.

Why imported vehicles are cheaper

Imported vehicles are cheaper than locally made ones, because the former achieve high volumes with lower overhead cost. Imagine, it costs an automaker about the same overhead to make either 100,000 or 1,000,000 cars. The more you produce, the cheaper it becomes.

Therefore, when the latter spreads its production cost over few vehicles produced, in simple arithmetic, they are bound to be more expensive than that of its Japanese counterpart, who produce 100s of thousands (Some produce millions). This same factor partly led to the demise of Nigeria’s first generation auto manufacturing plants. History has it that a Peugeot 504 made in Nigeria sold for as low as N5000. While Volkswagen beetle sold for as low as N2,500, all because of high sales volume. Many local parts makers were already springing up. Peugeot, for instance, was said to have increased local content to over 25%. But one idiotic regime came in the name of civil rule (1979), opened the nation’s borders to imported vehicles, which sliced a large chunk of the market off the local auto makers. Volkswagen closed. Peugeot went moribund.

Unfortunately, past and present administrations of Nigeria seem to have learnt nothing from history.

This is the problem. Nigerian car makers can produce and sell to Nigerians at prices cheaper than imported ones, if only the market is available for them to utilize their capacity utilization maximally.

Today, out of over 200,000 cars sold in Nigeria per annum, local assemblers and marketers have less than 20,000 market share, which takes me back to the fable of a CAT’s  PRAYER.

Growth of local industry is being restricted by unfavorable government policy. Like the fable cat, all that the nation ‘s auto industry prays for is a favorable operation environment, which could simply be created by passage and implementation of the Nigeria Automotive Industry development Plan (NAIDP) bill.

If the bill is passed and goes into operation, unfair competition from imported new and used vehicles shall be discouraged.

Nigerians shall be encouraged to patronized locally made automobiles via introduction of auto finance with single digit interest. And with that, volume should increase to the extent that Original Equipment manufacturers (OEMs) would storm the country, enabling local auto makers to purchase substantial percentage of their automobile content from Nigeria (with local currency). That will further cut production cost and save the nation huge foreign exchange.

The NAIDP will also stop uncontrolled vehicle import. Despite this administration’s ban on importation of vehicles via the land border, vehicles are still being smuggled into the country and registered with the help of law enforcement agents.

Full implementation of NAIDP will stop the nonsense, because every imported vehicle must compulsorily have a VIN (Vehicle identification number), without which it cannot be registered to ply Nigerian roads. Also, NCS shall be mandated to share its 17 digit Vehicle Identification number (VIN) window with Federal Road safety Corps (FRSC) as well as Vehicle Administration Authorities in the 36 States and FCT to facilitate easy verification of vehicle duty payment status at point of vehicle licensing and curtail smuggling and illegal vehicle assembly by the ghost auto industry operators across the country. Ghost auto industry operators usually buy accident or cheap vehicles in Europe/America, break them to parts, clear them as scraps and assemble them at places like Ladipo market in Lagos for sale at ridiculously cheap price to Nigerians. That is all Nigeria’s auto industry needs from President Muhammadu Buhari (PMB) to blossom, create thousands of jobs and help strengthen the nation’s economy.

Unfortunately, monitoring the development relating to the prospects of the industry since PMB assumed power about five years ago, one cannot but get worried.

After winning 2015 election, stakeholders were assured that the auto policy would not be tampered with. Lie. For the second time, National assembly passed NAIDP bill into law. But the industry was kept in limbo till after the 2019 election, when the president announced his decision NOT TO SIGN THE BILL.

Following appointment of a new Minister of industry, Otunba Niyi Adebayo, we were told late last year that auto industry stakeholders would be gathered again to agree on a way forward. It happened in January. Motoring journalists were not invited. The meeting, from my findings, was a mere waste of time, because as of the date of putting together this write-up (August 20st 2020), the NAIDP document, I was reliably informed, was still gathering dust in the National Automotive Design and Development Council (NADDC). Why the delay? After all the only reason put forward for not signing the bill was that “it contained some errors that needed to be corrected”. Those errors were not noticed when the bill was resubmitted to the national assembly in 2016? They were not noticed after the bill was passed by the senate and lower house in 2017?

Honestly, the only error that has been chasing the NAIDP like a shadow are road side advisers from NCS, who think only of amount of duties they could generate from imported vehicles far more than job creation in Nigeria, which is a shame. To the illiterates, it does not matter if Nigerians are unemployed. But the jobs we are helping to maintain Asia, Europe and America.

By the way, what error are they refereeing to? Is it injecting money to introduce auto finance? Is it tariff increase on imported used vehicles to enable local auto makers to increase sales volume and sell vehicles to Nigerians at affordable rates? Is it asking NCS to share data with FRSC, VIO and tax office, so that no one would be able to register smuggled vehicles? I don’t get it.

Aside giving the federal government a wrong and amateurish economic advice, NCS has, till date, failed to share its 17 digit Vehicle identification Number (VIN) with the FRSC and Vehicle Administration Authorities in all the states of the federation.

Another sore point is the willful disobedience of the nation’s patronage law for purchase of locally assembled vehicles. This law is not new. It has always been there. But almost all government departments at national states and local levels contravene it with impunity.

Worst, instead of moving forward, PMB regime seems to have put the nation’s auto industry on a reverse gear. Recently, this same five-year-old government requested for a blueprint for the Nigerian manufacturing industry, for which MAN mailed to auto industry stakeholders for impute. Talk of an attempt to reinvent the wheel.

Of course, like engaging angels to provide daily meal for the FABLE cat, auto industry was not totally forgotten, especially during COVID-19. There was a palliative of debt rescheduling, media statement of which was sent to us in Motoring World for publication. Headlined: NADDC unfolds Palliatives on Auto sector Loans.

We gathered that NADDC secured an approval from the Bank of Industry (BOI) to reduce by 2% across board the interest on loans borrowed from the bank by local automobile industry stakeholders for a period of 12 months, starting from April 1st 2020 to March 31st 2021.  It also added deferment of repayment of the loans by three months.

Secondly, recently, Manufacturers Association of Nigeria (MAN) sent a mail to auto industry stakeholders regarding how they could benefit from a N2.1 palliative fund approved for the nation’s manufacturing sector by the Federal government.

As commendable as the foregoing might sound, government’s action is still very contrary to the FABLE CAT’s prayer. For the sake of emphasis, what the industry needs from PMB regime are the necessary legal enablement that encourages local patronage, removes unfair competition from foreign auto makers, forces the Bureau for public procurement (BPP) to enforce the patronage law for purchase of locally assembled vehicles, mandates NCS to open up its 17 digit Vehicle Identification number (VIN) window to the FRSC as well as Vehicle Administration Authorities in the 36 States and FCT to facilitate easy verification of vehicle duty payment status at point of vehicle licensing and curtail smuggling. Given the foregoing, the industry might be the ones helping the government at a time like this, not the other way round.

Therefore, like using-a-stone-to-kill-several-birds, the Federal government needs to order NADDC to immediately resubmit the NAIDP to the national assemble and ensure accelerated passage.  As soon as the bill is passed again, PMB should first append his signature before listening to any advice or comment from the traditional road side economic analysts (Finance Ministry and NCS).

By: FEMI OWOEYE No nation, including China expected a pandemic. But it came. It caught the entire human...
Read more
Kick Starter with Femi Owoeye

BY: FEMI OWOEYE Dear Otunba Niyi Adebayo, Following your appointment as Minister of Industry, Trade and Investment, one of your first move was to order a...
Read more