Though the new BMW X4 wears a mischievous look, it’s so clever that it can almost make a cup of tea, reports FEMI OWOEYE

[dropcap]B[/dropcap]MW too has joined the world automotive mummies, that have done away with family planning. Like Mummy Toyota, Mummy Hyundai and Mama Honda, BMW too now breed yearly like a rabbit. The latest of her babies struck me like a thunderbolt. Honestly, if you’ve got eyes for motoring details, you’ll see what I’m seeing. Sighting its photograph for the first time, what caught my attention was a sunshade. And I called Rotimi Asher’s attention to it. Of course, he burst to laughter.

Get me right. Ever since I started motoring journalism over two decades ago, I have seen cars with eye lashes. I saw one with mini skirt. In those wacky days of the defunct National Interest Newspaper, readers would remember me writing about a Mercedes Benz saloon car having eye balls akin to two kegs of palm wine. And lots more.

But I never noticed any wearing a pair of parasol. However, today I am pleased to call your attention to BMW’s new baby, ready to show off at showrooms with his sunglasses. Cheeky, you’d agree. Go straight and check out the picture. See what I mean?

The Cheeky boy. No need to spend money buying a pair of spectacle for the baby BM. Its designer simply fixed on it a pair of slimmer headlamp, which flows onto the BMW’s kidney grills, thereby leaving the imaginative picture viewers like us ‘whaohing’.

Now, why the birth of X4 this time? Despite criticisms around the world that BMW had bred too many variants of cars so much that auto enthusiasts are getting confused. Imagine, in Malaysia alone, BMW offers not less than 13 models with over 40 variants. Of course certain analysts believe there is nothing wrong with BMW’s “rabbiting” birth rate, a view I agree with,  because, at least, all including X6 have been stories of success. More than that, auto baby adopters/buyers now have choices. 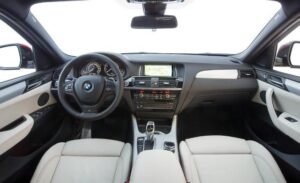 Don’t be deceived by the new X4’s cheeky look. Just like 2014 Honda Accord, Mazda 3, Chevrolet Corvette and 2015 Audi A4, Hyundai Genesis and Porsche Boxster, has been born with clever brain. Inteligent. To some extent, if I may put it that way. For those who are unfamiliar with cars with keyless entry, I tell you this: If you can afford to own an X4 from BMW, no need to physically hold your ignition key. So long as it’s kept in your trousers’ or suite’s pocket or even in your handbag or briefcase, X4 will unlock itself for you. Oh yes. With the key in your pocket, he can recognise you when you are close by and unlock the door. Once you settle behind the driving wheel, he gets itself ready for you to drive without having to bring out the key. Simply press an ON/OFF button and his engine comes alive. Off you go!

One more thing. Still with the key in your pocket, as soon as you reach your destination and you need to pick up your luggage from the boot, X4 has a way of sensing your presence through an invisible short directed wave made by your foot below the rare bumper. The booth lid (tailgate) automatically opens for you. After you are done, simply turn away without touching the lid. It closes automatically. That means even if your hands are full of luggage in which case ordinarily you’d have to put them down to shut the boot lid, no need to worry. The new X4 understands. He’ll shut the boot for you robotically as soon as you step away. See? Smart cheeky boy.

Get prepared for this.  X4 is of  “silver spoon“, spoilt with luxury features, including sport leather steering wheel and sporty shape gear selector lever. I understand that buyers are free to go for extra touches with top quality wood trims or cool metallic look. For those who have driven its sibling, BMW X3, note that X4 shares some DNA details with it. For instance, you can’t miss their akin dashboard and trim. The bit you may not notice is the chassis, which X4 also shares with X3. It also features an 8.8-inch screen that gives you access to the navigation system, as well as what Nigerian guys call “gbedu“, that is your sound system, with 20 GB hard drive storage and BMW Connected Drive services that gives you access to the internet. If you opt for the M Sport package, you’ll be further spoilt with a 16-speaker system with a 600W output for an orchestra-like sound. You also get head-up display that showcases information like warning messages, speed limits, ECO PRO driving tips, and navigational directions.

There are more available extras, if you can afford to pay more. Why not? You can have what they call Dynamic Damper Control. You can opt for Driver Assistance package, which gives you rear-view camera and park-distance sensors. You can also have adaptive full-LED headlights, satellite radio, satnav with real-time traffic info and a head-up display, heated front seats, and even a device that enables you to connect smart phone with Bluetooth or a USB cable.See? When I claimed X4 can almost make a cup of tea without you getting up from your sofa, you now realize what I mean. 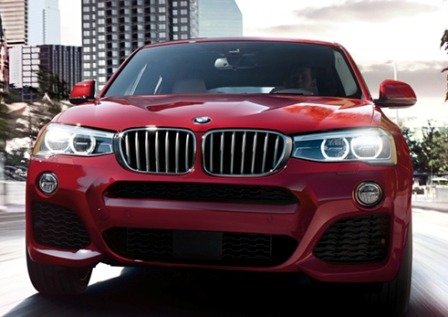 A motoring Journo colleague, who test-drove X4 in Europe told me it’s roomy. I haven’t driven it. But I believe him. Rear passenger would find the rear seats a bit  lower than the front. It’s deliberately meant to be like that. BMW claims it seats three adults comfortably. I’ll give you my verdict on that and more as soon as Nigeria‘s BMW Franchise dealer, Coscharis or the UK BMW sales and Marketing subsidiary in Famborough, England gives me one to test-drive.

That boot, which opens itself for you also has voracious belly of 500 litres. That would probably be enough to swallow two golf bags. It gets bloated to 1400 litres, when you fold flat the split rear seat bench.

This cheeky boy is strong-hearted. I mean engine capacity-wise, X4 is as strong as 245 horses combined. That’s simple enough for your to catch isn’t it? Right. To the tech-minded. It comes with 2.0-litre, twin-scroll turbocharged unit, providing you with the 245 horsepower as well as 350Nm(Nm refers to Newton Meters) of torque(a measure of how much a force acting on an object causes that object to rotate). Though this car weighs 1,845kg, with the kind of power beneath its hood, it’s capable of hitting 100km/h in just 6.4 seconds and to a top speed of 232km/h, where that is allowed. No matter what. in Nigeria, it’s illegal to go beyond 100km/hr. And in Great Britain, the highest you go is 80miles/hour. The engine also marries an 8-speed automatic transmission and all wheel drive as standard, which is what BMW calls xDrive.

To those who missed the news, the new X4  is already in Nigeria, courtesy of Coscharis Group,  the nation’s franchise dealer for BMW and Ford. Precisely, the car was unveiled to motoring journalists late last year at Coscharis showroom in Victoria Island, Lagos. But I’m sure you’re better off seeing the car through my eyes. I shall serve you more after test-driving the car.

And don’t forget. I dare to say the new X4 wears a Cheeky look. But it’s flamboyant and strong. And when you buy one, remember it shares DNA with the X6 and X3. I still can’t believe this car wears a sunshade. Or is it my imagination? Tell you more after test-drive.