Home Opinion At 60: Why the Auto Industry can’t Breath in Nigeria
OpinionTildaview with Matilda Frances

At 60: Why the Auto Industry can’t Breath in Nigeria 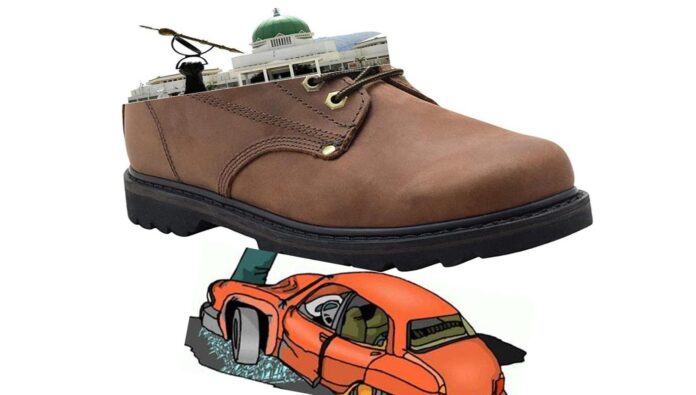 Being a woman, I can happily multi-task. But, for me, writing is a hobby. Aside Motoring, I write about any subject under the sun; fact-based fiction and non-fiction.

About six weeks ago, I started writing a novel, which I aim at finishing by Christmas. Weekly hours  dedicated to my story I wasn’t going to share.

But from the eve of the Nigeria’s 60th independence anniversary, I have been strongly disturbed about the industry we report on in Motoring World. My brain went through raves and rants, which needed to be ejected through computer keyboards.  My thought got stronger, when I noticed that on October 1st, no line of political speeches mentioned the auto industry. Yet this is a very ailing sector.

Yes, President Muhammadu Buhari administration beats its chest about achievements in agriculture. I kept receiving this question in my head: What about the auto industry and its stakeholders, including registered auto assemblers, allied industries, even motoring media?  Nigerian government seems to have tactically abandoned the auto industry, one of the largest employers of labour in the world. Why? Or is it out of ignorance about the economic prospect of the sector or what?

Imagine. Despite the existence of several licensed auto assembly plants in the country, most members of the nation’s political class prefer buying and proudly cruising about in imported vehicles. With impunity, they violate the nation’s patronage law for purchase of locally assembled vehicles. And the Bureau for public procurement (BPP) looks the other way.Or is deliberately blind.

Worst, after four years, the imported  cars are replaced with new ones? What happens to the so-called old ones is too ugly a subject to be reviewed. We are talking of cars bought with tax payers’ money!

Why is no one being held accountable for a blatant disregard for laws that state in essence buy local before importing?

If the Nigerian auto industry needed help, it is now. What do we see? This is a nation where a lawmaker goes home with monthly expenses of nearly N9 million plus other perks on top of big wages. We are talking of the lower house (House of Representatives)alone, where you have 360 members, who are maintained with over N3.2 billion monthly. That is almost N40 billion annually.

Half of that could have been invested annually into auto finance, making it easy for Nigerians to acquire locally assembled vehicles, with single digit interest rate. More could even been saved from the bullions that 109 senators take home annually. Same goes for governors, president, Vice president, with all unnecessary office holders created for political compensation.

Could someone please explain why? I sure someone could justify such excesses. But I am yet to see a valid one.

Why hasn’t the National Auto Industry Development Plan (NAIDP) bill been signed into law? Where is it? Who has got it?

Because of the foot-dragging of the passage of the NAIDP bill, the industry cannot guarantee its survival. But then, with selfish politicians that we have, why worry? They will have a good excuse for ripping off the country, as they always have and continuing a tradition of import and damn anyone else. It is not just car manufacturing that is at stake, but the economy. The auto industry also generates jobs in satellite industries. Think rubber. Think Information technology. What about the fabric industry, windscreen makers, auto electric cables, even carpet makers and, of course, the tyres and paint manufacturers? These are just a few. Think also on the thousands of jobs waiting to be created.

Without those jobs, there will be no cash flowing. Cash flow is important. It is so simple. If no one can spend, the economy fails. But pockets of politicians never fall short. Once elected and in the system, they are safe and secure, massive wages, even bigger expenses. Let us not forget the exceptional pension plans, all paid for by the tax payer. But what about the tax payer, the “common man, woman and child”?

In April 2019, Senator Ben Murray Bruce presented to the national assembly a bill to phase out petrol vehicles by 2035 and introduce electric cars. One of the reasons why the bill was thrown out was that it would have had a negative effect on the nation’s economy. The HOW is one of the most ridiculous political statements I have heard in recent years.

In his debate presentation, the then Deputy Senate President, Ike Ekweremadu was quoted to have argued thus: “If we go down in history donkeys were used as means of transportation and there is no law that caused people to begin to use cars.

“Besides, in economic sense, we are an oil producing country. So, we should do everything possible to frustrate the sale of electric cars in Nigeria to enable us to sell OUR oil.” 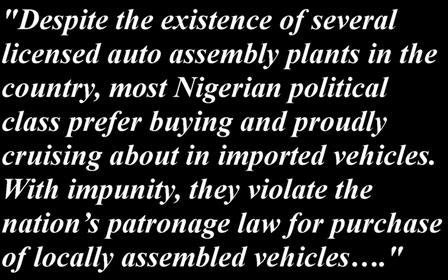 Imagine that last sentence!! Talking shortsightedness and ignorance, what has happened to the oil he touted at the debate? What is happening in Europe, America, Asia and even some African countries? Electric vehicles are taking over. From all indications, Hyundai Nigeria is set to flood the country with electric vehicles. Nigerian government is going to start conversion of  petrol-powered vehicles to gas. As recent as April 2019, an informed public official should have seen this coming. Print, broadcast and online media have been awash with the growing popularity of electric vehicles.

But it is not really about Electric vehicles or indeed auto industry. It’s about filling their pockets with tax payers money. And to them, the only source they know is the oil sector.

Following the rejection of his bill, Senator Bruce was said to have raised a Point of Order, saying that posterity would judge him right for the need to embrace electric vehicles, warning that in no distant time, combustible vehicles would be phased out.

Good argument. His bill and presentation would have made more sense had it been all encompassing, asking for the passage of NAIDP bill. Not what is to happen in 2035. What the industry needs now is an enabling policy with legal teeth to thrive. The issue of Electric vehicle would naturally fall in place, as soon as the nation’s politicians give the industry the legal backing it needs.

As a journalist reporting the industry, I don’t need to gaze into a crystal-ball to know that the nation’s auto industry is unwell. I don’t know how some stakeholders have managed to keep going. Since the beginning of this year, not more than three auto companies have done product launch.

Due to egocentricity of the political class, Nigeria’s auto industry can’t breathe.

This cannot continue. For politicians at all government levels, it’s time to start thinking of wage freezes, not increase. Or have they forgotten that they are out there to serve the nation and the people in it, not the other way round?

Contrary to Senator Bruce’s belief, posterity would judge Nigerian political class for killing Nigeria’s auto industry, not for refusing to pass a law making Electric Vehicle compulsory from 2035.  It’s not too late. By their attitude, coupled with selfish waste of the nation’s scarce resources, their knees are on the neck of one of the largest employers of labour in the world. Nigeria’s auto industry can’t breathe. Urgent action is needed before it dies.

Following an extra-ordinary conversation with the future, Motoring World’s Editorial Director, TILDA FRANCES, revealed what the future world of motoring would be...
Read more
Contributors