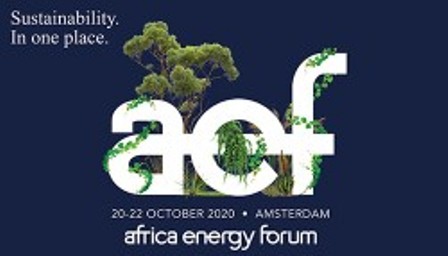 This year’s Africa Energy Forum (aef) (www.Africa-Energy-Forum.com) has been rescheduled to take place in Amsterdam, the Netherlands from 20-22 October 2020. Previously due to take place in July, the move comes in the interests of all attendees’ safety after monitoring the COVID-19 situation and its impact on global economies.

The Forum, organised by EnergyNet, brings together decision-makers in Africa’s energy sector to form partnerships, identify opportunities and collectively move the industry forward.

EnergyNet’s Managing Director Simon Gosling commented on the move; “This decision has not been taken lightly and we hope clients will recognise this opportunity to fast-track their business development after a significant period of disruption.

We’ve chosen Amsterdam for a number of reasons – most importantly its exceptionally resilient economy and $42bln investment fund being deployed across the continent to support energy transition goals. The Netherlands played host to the very first aef back in 1999, and continues to play an exceptional role in the development finance space with FMO being a significant and highly regarded player.

Despite challenging times we’ve continued to receive registrations and high level speakers, so are confident this postponement will be timely and continue to focus heavily on project development objectives.”

In line with the SDG7 goal “access to affordable, reliable, sustainable and modern energy for all,” aef will host a stream dedicated to unpacking Africa’s role in achieving SDG7, debating how the continent can meet energy demands in light of global sustainability goals.

Between now and October, EnergyNet will host a series of webinars and other online content focusing on strategic energy programmes such as the REIPPPP resurgence in South Africa. The purpose will be to define the direction energy programmes are taking so clients can prepare strategies to be among the preferred bidders by the Africa Energy Forum dates in October.

Gosling added; “One thing that hasn’t changed and never will is our commitment to the sector. We’re every bit as passionate about delivering the outstanding networking experience our delegates have come to expect, and driving the sector forward – even at such a challenging time.”

An entirely new concept in automotive exhibitions opens its doors this weekend, created by the team behind The British Motor Show, which is launching...
Read more
EVENTS

Mazda At 100 | A History Of Competition Success

Within the last century, Mazda turn itself from a manufacturer of cork products to a successful independent global automotive company. The automaker’s story has...
Read more
EVENTS

The latest episode of World Car TV features the jurors test drives of new models from Volkswagen, Audi, Honda and Mercedes-Benz. A peak into the...
Read more