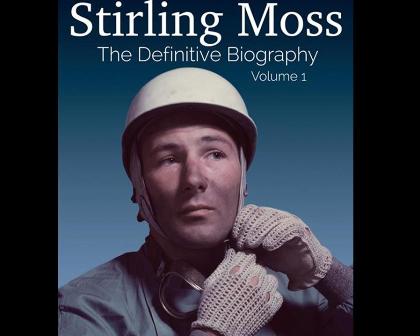 [dropcap]S[/dropcap]ir Stirling Moss is one of the greatest sportsmen of all time. He was successful in all forms of motor sport but most particularly in Grand Prix racing.

The ‘Beckham of his era’, Moss not only dominated the back pages of the newspapers but regularly made the front pages with his glamorous, jet-setting lifestyle in the ’50s. He raced hard; he played hard. He was the James Bond of motorsport.

Here, at last, is a serious biography worthy of the great man, a sporting icon who was a hero to many a schoolboy. One such was author, Philip Porter.

Debunking myths, correcting many mistakes and adding much new information, including previously unrecorded races, this is probably the most deeply researched motoring biography ever written.

Porter is the author of around 30 books, including several on motor racing and four written with Moss, but this is the book he always wanted to write. Two years’ research has gone into this first volume of two, and it digs far deeper than any book previously published. Indeed, it must be the most in-depth book ever published on a racing driver, and probably any motoring personality and very possibly any sportsman or woman.

This book, though, is no dry account. It is spiced with humour, tragedy and period flavour with liberal doses of quotes from Moss himself and his contemporaries, many of whom Porter has interviewed over the years.

The story is an extraordinary one. Starting out as a youth with precocious ability, young Stirling quickly caught the eye when racing the little 500cc racing cars invented just after the war. He soon ventured abroad where they laughed at his little racing car – until he beat them. He became the British Champion at 21 when most drivers were in their 30s, 40s or even 50s.

He patriotically insisted on driving British cars and the gallant crusader took on, often matched and sometimes beat the foreign cars with their more powerful engines.

Admirable patriotism nearly ruined his promising career until he was forced to compromise such principles and quickly revived his career and showed he could beat the very best at the highest levels. In the final year covered by Vol 1, he won his first Grand Prix and such sports car classics as the Tourist Trophy, the Targa Florio and the Mille Miglia, all amazing achievements but that in the Mille Miglia has gone down as one of the greatest feats in all sport.

Here, in fascinating, authoritative detail is the ultimate work on arguably the greatest all-round driver the world has yet known, a book worthy of a great man.

Author: Philip Porter has written around 30 books over the last 30 years. His titles have been chosen as Book of the Year by the Guild of Motoring Writers (twice), The International Historic Motoring Awards and the British Sports Book Awards. A number of his books have been short-listed for such awards. He has written four books with Sir Stirling Moss, and one each with Murray Walker, Barry Cryer and Martin Brundle.

Euro NCAP, on Thursday, published its third round of safety results for 2022. The KIA EV6 and the Mercedes C-Class, both large family cars,...
Read more
Load more
8
SHARES
FacebookTwitterSubscribe