So much has been said about Special Anti-robbery Squad, SARS. The echo has been so loud. You would think SARS officers were not elements of the Nigerian police.

Despite dissolution of SARS, a major menace that needs a remedy in the proposed police reform bill is police brutality against motorists. This has almost become an acceptable norm. It has been before the formation of SARS. Many lives have been lost. And I mean passengers and drivers.

A pathetic incidence occurred in early 90s. A commercial vehicle (Peugeot 504 station wagon), was conveying passengers from Ekiti state to Lagos. Between Lagos-Ibadan expressway was an illegal police roadblock. While on the illegal duty through the night, the police made burn-fire on the side of the road.  Before dawn, the said Peugeot 504 was stopped at the illegal checkpoint. The purpose was to extort money from the driver.

Unfortunately, before the operation was completed, the same officers sighted attempted to stop an oncoming heavy-duty trailer truck. The trailer’s driver was determined not to stop. So he attempted to overtake the stationary commercial vehicle.

In the process, the trailer brushed the stationary car, pushing it sideway onto the police burn-fire. Boom!! The car caught fire.  The doors got locked. I recall that the old Peugeot 504 was notorious for door lock problem. Any collision (front, rear or side) or fire incidence would result in total door lock. It would become impossible to open the doors.

Therefore, Passengers’ attempt to open the doors proved abortive.  As the passengers struggled, you would expect the police to help in rescuing them. No. Because they were on the road illegally, they turned their back on the dying passengers andd took to their heels.

The driver and front seat passenger, who sustained major burns, managed to escape. By then, the entire vehicle was engulfed in fire. Seven passengers burnt beyond recognition. One Adenike, a native of Ayebode-Ekiti, my hometown, was one of the completely burnt victims. The driver and one surviving passenger told the story from their hospital beds.

The culprits were not SARS. They were regular police officers. They ran away, leaving innocent vehicle occupants to burn to death. Such elements are still in the Nigerian police force. SARS’ ban would not change them. Many of such officers are not properly educated. They grow through the ranks. There has been photo evidence of some allegedly smoking Indian hemp while on duty. I have seen uniformed police officer drinking alcohol.

Generally, Nigerian motorists have suffered more in the hands of the police. Many have been shot and killed by regular police, not SARS.

Therefore, any reform that does not look into the entire architecture of the nation’s police force would be mere waste of legislative process. Within the last three decades. I have, in my writings, recommended two major ingredients of effective reform. They include:  monitoring and training.

Monitoring: Former acting Inspector general of Police, Mr. Solomon Arase, set up what was known as STOP-THE-BRIBE online platform. In a write up published July 2015, I identified the weakness of the strategy. It hasn’t worked. For Nigerians are so afraid of the police that many would not want to risk capturing their activities with phone camera.

Responding to the ongoing #ENDSARS PROTEST, coupled with the proposed police reform, therefore, I am once again recommending what I tag: Spy the Road Guards. I proposed this to the former Acting IG, Arase, when he returned police checkpoints. It is a simple but effective solution that would ease the present IG’s assignment.

It involves setting up an independent police monitoring unit. This should compose of plain-cloth spies, who could be educated civilians properly recruited and trained. Their major assignment is to search out what the police are doing, institute arrests or direct enforcement units to culprits’ locations, where they’ll be arrested and necessary penalties follow. I believe, as soon as few bad eggs are picked up, others will sit up. This will work, because every police officer on duty would not know who is who in a public transport in which a spy might be travelling.

And as soon as the nation’s economy improves, this should be followed by police digital body cameras, as it is practiced in United Kingdom. This would record police conduct on duty, an effective deterrent against police criminality. And it would be a crime for an officer to remove or tamper with the camera, because an alarm will be activated at a regional control room.

Training: In the new police reform, no one with less than first university degree should be admitted into the Nigerian police Force. There is no substitute for education.

Secondly, most of the soiled fingers causing bedlam in the police are the uneducated, who grew through the rank. I would have recommended they are identified and sacked. But, they have tendency of going into armed robbery. The alternative would have been to weed them out and shoot every one of them. But human right forbids that. That is why I recommend intensive retraining, which must include sanity test. Any officer, who fails psychological test, should be transferred to psychiatric center. If such test is carried out, we might end up discovering that the nation has all these years been policed by hundreds or thousands with mental problem. 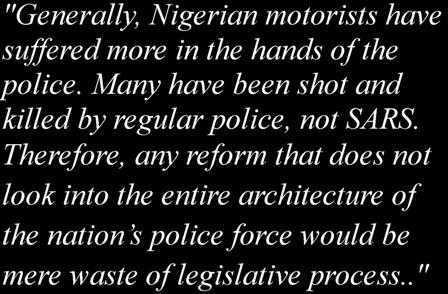 Not long ago, a Motoring World’s staff queued up to use a cash machine. An armed, uniformed police officer arrived and requested to be allowed to jump the queue and draw money before everybody. According to our staff, the police threatened the person in front of the queue for resisting his move, so much that the place became chaotic, because of one armed police officer.

Thanks to our staff, who confronted him, when majority were ready to run for their lives. No doubt a police officer, who exhibited such a behavior in a public place, is most likely to fire the gun at a motorist, who refuses to do his proffer in a secluded place. He was not a SARS member.

Truly, any police reform without the foregoing ingredients would be a wasted undertaking.

At 60: Why the Auto Industry can’t Breath in Nigeria

MATILDA FRANCES Being a woman, I can happily multi-task. But, for me, writing is a hobby. Aside Motoring, I write about any subject under the...
Read more
Contributors

Prayer of a Cat: What the Auto Industry needs from President Buhari