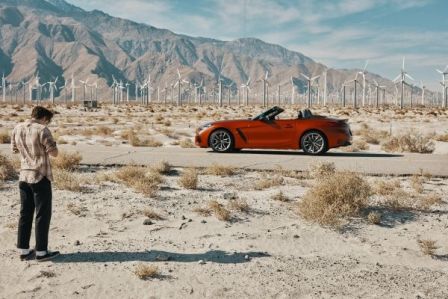 He loves analogue black-and-white photography and tattoos – clearly, Brooklyn Beckham is as difficult to pigeonhole as the new BMW Z4, which combines the classic vehicle concept of the roadster with cutting-edge technology.

And there’s one thing the two particularly have in common: they are always keen to cause a stir. BMW brought them together in Coachella Valley near Palm Springs in Southern California: the young, up-and-coming photographer and the two-seater convertible that has now thrilled fans of open-top driving for several months.

The photo shoot in the Southern Californian desert was the first official stage of a long-term collaboration which aims to tap into new perspectives on current BMW models.

Already attracting a growing international fan community, Brooklyn Beckham captures his motifs authentically through the eyes of the young generation, in the individual style of a constantly inquisitive, ambitious artist with an enthusiasm for automobiles.

For Beckham, the upcoming BMW projects present a welcome opportunity to demonstrate his capabilities in an additional field of photography, while at the same time enabling him to explore his own fascination with sports-style cars. The first encounter between Beckham and the BMW brand was itself a noteworthy occasion. The young photographer visited the BMW Group Design Studio last summer and was able to take some initial shots of the BMW Concept Z4. Together with the design team he also modified his own personal vehicle. There is no doubt about it – the new BMW Z4 definitely struck a nerve with Brooklyn Beckham: “cool and dangerous” were the words he used to describe it – and “the most mind-blowing car I’ve ever seen.”

A few months later, the unconventional artist and the distinctive model came together again for the first project as part of the collaboration with BMW. The assignment was likewise unique: Brooklyn Beckham was to use the shoot not only to portray the BMW Z4 but himself as well.

He set to work in December with his favourite camera, a Hasselblad 503 – the young photo designer’s constant travel companion. The time of year would have been daunting for an outdoor shoot schedule in Central Europe – but in the Californian desert, with an average temperature of 21 degrees and at least five hours of sunlight per day, it was a sheer pleasure to work outdoors. Beckham: “The lighting conditions were fantastic.”

This is hardly surprising: even in California, Coachella is known as the “City of Eternal Sunshine”. It is also where the private race track Thermal Club is located, its asphalt trail winding its way through the desert landscape like a grey river – the perfect setting for the kind of creative process Beckham thrives on. Dressed in T-shirt and chinos, the photographer circled his subject from all sides, studiously set his sights on details of the vehicle and the surrounding landscape and portrayed himself and the BMW Z4 using the cable release – as well as skateboarding around the roadster and on the race track. Each picture speaks volumes about the amount of fun he had on the job.

“I take a photo whenever I see anything interesting.” Brooklyn Beckham’s description of his approach may be simple and modest, but he goes about his work with enormous diligence and expertise. This is reflected in the pictures he took in Coachella, too: they give the BMW Z4 a very distinctive presence against the contrasting effects of the soft Californian winter sunlight, the pastel shades of the surroundings and the bleak background of the rugged landscape.

And this is precisely where the collaboration between BMW and Brooklyn Beckham is due to continue: another photo shoot has already been planned to coincide with the Coachella Valley Music and Arts Festival – a longstanding a cultural highlight in Southern California. BMW i is the official festival partner, and the young photographer already has a fixed date with the BMW i8 Roadster designed especially for the occasion. Fans can look forward to the angles, light and colours Beckham will use to portray the open-top plug-hybrid sports car.

The photographer: Starting out in the world of photography, undertaking his own shoots while interning for established names such as Nick Knight he currently has some 12 million followers on Instagram.

The model: The BMW Z4 was first launched in 2002, the third model generation has been on the market since the end of 2018. Powerful 4-cylinder and 6-cylinder in-line engines make the two-seater an open-top sports car. The modern interpretation of the roadster features a classic soft top as well as cutting-edge technology in the areas of operation and connectivity.

Miss Soweto 2020 Drives Away In a New Toyota Starlet

The winner of the 2020 Miss Soweto beauty pageant, Thobile Steyn, drove away in brand-new Toyota Starlet from the competition. Steyn, who incidentally celebrated...
Read more
My Life, My Car

“Why I am Endorsing Bajaj Brand” – Austin Jay Jay Okocha

FEMI OWOEYE nigeria’s legendary footballer, Austin jay jay Okocha is truly an all the rage brand. First hand, I discovered how well-liked he is during...
Read more
My Life, My Car

Miss Soweto 2020 Drives Away In a New Toyota Starlet

The winner of the 2020 Miss Soweto beauty pageant, Thobile Steyn, drove away in brand-new Toyota Starlet from the competition. Steyn, who incidentally celebrated...
Read more

ROTIMI ASHER The Minister of State for Petroleum Resources, Chief Timipre Sylva, has assured Nigerian motorists that conversion of their cars to use Compressed Natural...
Read more