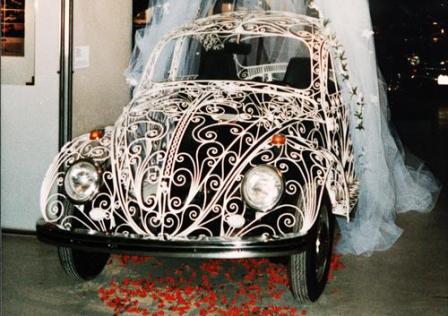 Volkswagen Beetle, popularly known as The People’s Car on Sunday made its debut at one of the most prestigious collector-car events in the world, the Amelia Island Concours d’Elegance.

To celebrate both the final year of the current-generation Beetle and the 70th anniversary of the first Beetle being sold in the U.S., the Concours hosted a class for Beetle cars with custom coachwork.

The Concours, now in its 24th year, traditionally features a special class that stands apart from concours orthodoxy. In the past, the Amelia Island Concours has featured the like of movie and advertising cars, but this year chose to highlight an overlooked segment of Europe’s carrozzeria (or karosserie) culture with a class of custom coachwork Volkswagen vehicles.

”We’re delighted that the Amelia Island Concours chose to host a class for the Beetle with custom coachwork,” said Klaus Bischoff, Head of Volkswagen Design. “While everyone knows the humble Beetle, it’s less well-known that the Beetle platform was used by a number of coachbuilders in Europe to produce the amazing, unique vehicles on show this weekend.”

“The Volkswagen with custom coachwork is the flipside of the Bug’s original American mission and message: and thus the perfect fodder for an Amelia Concours special class,” said Bill Warner, Founder and Chairman of the event.

Founded in 1955, Volkswagen of America, Inc., an operating unit of Volkswagen Group of America, Inc. (VWoA) is headquartered in Herndon, Virginia. It is a subsidiary of Volkswagen AG, headquartered in Wolfsburg, Germany. VWoA’s operations in the United States include research and development, parts and vehicle processing, parts distribution centers, sales, marketing and service offices, financial service centers, and its state -of-the- art manufacturing facility in Chattanooga, Tennessee.