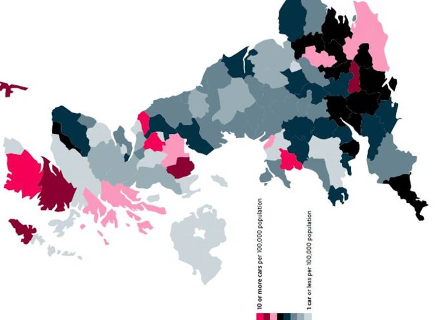 [dropcap]R[/dropcap]ural dwellers are leading the way in Britain’s online car-buying revolution, according to a new study.

Hot spots for online car-buying in Britain have been identified as far north as the Scottish Highlands and islands – including the Outer Hebrides – as well as parts of Wales and the south east coastal counties.

Online car sales data usually suggests there is a greater concentration of buyers in the big metropolitan area, where most of the population lives. But online-only car retailer BuyaCar.co.uk arrived at the true picture by calculating its sales per 100,000 of population.

BuyaCar.co.uk’s delivery analysis reveals that customers in the Scottish Highlands and many English and Welsh coastal areas are more likely to order their car online and have it delivered to their door than those in London, Manchester, Birmingham or Newcastle.

These customers are typically further away from their local car dealership. Online car retailers are often the only realistic way of comparing cars and prices.

Analysts crunched the national numbers after discovering that the average distance BuyaCar.co.uk covers to deliver a car to a customer’s door is 197 miles, based on data from the past six months.

In what is believed to be the first study of its kind for car-buying they have now produced a ‘heat map’ of Britain, revealing where people are most likely to opt for the online-only car purchase method instead of taking the traditional approach of visiting physical dealerships.

Online car buying has exploded in Britain in recent times after BuyaCar.co.uk first pioneered the concept in 2002.  Back then there was widespread scepticism that motorists would ever be comfortable buying cars without first touching, smelling and driving the exact car they wanted to buy. But BuyaCar.co.uk found that some people were happy to have found a new way to buy a car that didn’t involve face-to-face haggling.

Since then the internet has become the ‘shop’ of choice for countless consumers with online spending representing nearly 15% of all retail spending in Britain, according to the latest government figures for January 2017.*

Today even motor manufacturers themselves are joining in to create what has been dubbed as ‘the Amazonification of motor retail’.

Hyundai, Peugeot, BMW and Smart are among the manufacturers that offer the option of buying their new cars online.

BuyaCar.co.uk has welcomed increased competition in online motor retail over recent years as a sign that resistance to the online purchase process for the 2nd biggest item most people will ever buy is gradually disappearing.

In its latest survey of nearly 1,000 motorists more than 25% of people said they were no longer afraid to buy a car without seeing it first.**

BuyaCar.co.uk provides a shop window for motorists to scour the best deals on new and used cars dealers nationwide. The company handles each order, delivering each car to the customer with a 14-day money-back guarantee.

Austin Collins, co-founder and Managing Director of BuyaCar.co.uk said: “Because we aren’t delivering from a central location we were interested to see how far the typical delivery to a customer’s door was.

“When we found that the average distance is nearly 200 miles we looked to see how far flung our customers were – and that threw up some surprising facts about people who buy cars online.

“Naturally, in terms of raw numbers, most of our sales were in the big city areas where most people live. But when we compared our sales with population density it revealed that places like the Highlands and islands of Scotland are home to the keenest online car buyers.

“So, although we sell a lot of cars to people in London, Manchester and Birmingham we actually have a higher sales rate in many rural areas.

“This dispels for us any lingering myths that rural dwellers are slower than city types when it comes to adopting new ways of doing things.

“It also shows the importance of the internet to rural communities, for whom visiting lots of car dealerships is a much more time-consuming and expensive task.

“We also shouldn’t forget that this is a win-win from everyone too because online motor retail means dealers can now reach real customers who are too far away to spend time kicking tyres on the forecourt.”