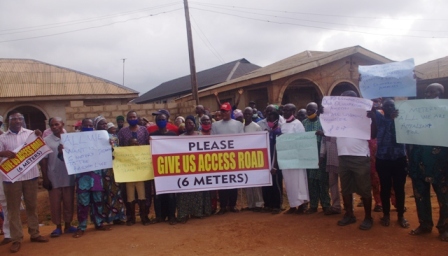 Residents of estates within Itoki rail line Communities in Ogun State of Nigeria have staged a protest, demanding for an access road before constructing a fence that separates the community from a newly-built modern rail line.

The placard-carrying protesters, consisting of landlords/ residents of 10 community Development Associations (CDAs), who accused the federal government of rendering them prisoners in their own homes, lamented that the said fence will deprive them and their vehicles access to their houses and other social and economic activities.

Speaking during a protest, the Chairman of Folarin CDA, Surveyor Akintola Ogunleye said: “The government is constructing a fence that will not permit access by vehicle into our houses, claiming the ownership of the land.

“We know in the former gauge, they had recommended a distance from the rail. We observed it but along the line, they came with a new gauge during the development of the new rail line. Since this is a new gauge, we are also entitled to a particular distance.

“When we were building our houses, we took into cognizance of the fact that we must give the recommended space, which we actually obeyed. Now that a new development has come up, we want them to consider us by giving access road of at least six meters. We are pleading with the Minister of Transportation, Rotimi Amaechi to give us six-meter access road.”

Ogunleye who said his community is not oblivious of the fact that the rail line development is for the benefit of the entire country, stressed that even at that, it should not turn them to prisoners in their homes.

“What they are doing right now is tantamount to imprisonment,” he pointed out, adding,  “The imprisonment will deprive us of freedom of movement and livelihood because if they succeed in barricading us, a residents, especially those who have vehicle will have to pack their cars along Agbado road and find a way through the backyard to enter his house.”

Also speaking, the Chairman of Irewolede CDA, Pastor Ebunoluwa James recalled that the present location of their community, where a rail line passes used to be a thick bush before they started settling there from1998.

“When we saw the construction of the second rail line,” James explained further, “we got agitated because we thought if the third came on stream, we might be affected. We consulted the Omonile (original land owners),who brought a chart and assured us of safety. When the modern rail line project started, we saw that the earlier demarcation was moved inside which causes our imprisonment. We are pleading with the government to give us six meter to enable access to our houses.”

The Chairman of Royal CDA, Rev. I. D. Akinyonmi, who claimed over 25 houses were affected in his Community, said: “we have had a discussion with the Personal Assistant to the Minister of Transport after collectively writing a letter to the Headquarters of Nigerian Railway Corporation, Ebute Metta. He promised to look into it. Since there was no action, we thought we should intensify our plea by involving the press.”

Asked if the community would consider legal action, should there is no response from the government; he said his community might explore a court option, if the government fails to listen to their yearnings.

A landlord and a resident of Folarin estate, Pastor Gbenga Odesanya was furious at what he termed as government insensitivity, adding that his community, which used to be one has now been divided to two.

“The new rail line,” he lamented, “is separating existing businesses, schools and worship centers. It is a bid barricade. They are going ahead to fence us off. We equally need a pedestrian bridgeto take us over to the other side because we have been divided into two communities now.

Efforts made to contact the Personal Assistant of the Minister of Transport on the issue proved abortive, as the Minister could not be reached.