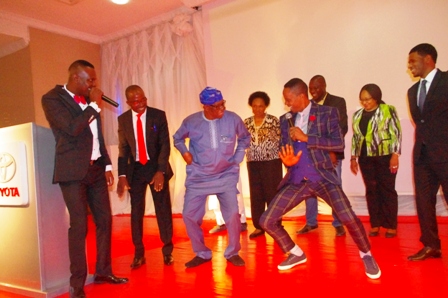 But, like many guests present at this year’s Toyota Nigeria’ award night held last week at Lagos Civic Centre, Chief Ade-Ojo, most likely, surpassed expectations of many, including his son and this writer.

It’s not common in African setting to find many nearly 80-year-old men with dancing steps of men in their 20s.

Master of Ceremony(MC) for the 2017’s Toyota awards Night assumed that, Chief Ade-Ojo, who will turn 80 June 2018, is old-fashion, when it comes to dancing and singing or even choice of music.

After the night’s award presentations, it was time for awardees’ celebration dance with TNL’s Chairman, accompanied by Kunle Ade-Ojo, TNL’s Executive Director, Chief Sam Bolarinde, among others.

Noticing that Chief was not too keen dancing to the first selections, DJ jokingly asked founder of Elizade Group, if he could dance to very modern youthful music, which calls for Makossa dancing steps.

“I will surprise you,” responded Chief Ade-Ojo.

That was it. All attention was on the podium. Attention of Awardees, including representatives of First Bank, Peace Mass Transit Limited, Department of Petroleum Resources, Master Global Concept, as well as Journalist of the year award winners from Businessday, Motoring World and The Punch, were on Chief Ade-Ojo.

A situation akin to the surprise marketing shot he gave RT Briscoe in the old days, when he incredibly sold 40 vehicles within four months, the veteran auto marketer amazed and impressed all during this year’s Toyota Award Night.

Fast-pace music played. Chief Ade-Ojo proved he was not bluffing. It was like watching King Sunny Ade making his Michael Jackson style dancing steps even at the age of 70. Chief Ade-Ojo will be 79 come June 2017. But to everybody’s amazement, he started with what looks like Reggae dancing hall’s kind of dancing steps.

And in matter of seconds, he did the twisting and shaking movements of the modern youth dancers.

He bent and twitched his feet, closing and opening his knees incredibly in a bent posture. It was brief but amazing. He did it. Apparently, as he promised, DJ was surprised.

Guests rose to their feet with mixture of surprise and admiration, some taking pictures with their phones. So fascinating, even Kunle-Ade Ojo, who was also on the podium for celebration dance with awardees, stopped and watched his dad with admiration. Smile on his face said it all.

Oh…That was not all. Chief Ade-Ojo was the man of the night. Before doing the Makossa dance, he sang Reggae music.

After delivering a keynote address, advising on the best way to manage automobile maintenance during recession, he took the microphone and entertained the audience, singing to the following late Bob Marley’s reggae lyrics:

Not an over statement, Chief Ade-Ojo did not just sing the lyrics perfectly; he did the moves of the late Marley, waving his head gently from side to side, a move the late Jamaican-born Reggae  music icon, made to show off  his dreadlocks.

Even without any dreadlock on the veteran auto dealer’s head, imaginative minds could nostalgically watch the late Reggae Musician on stage.

More than the female Saxophonist as well as professional dancers, who also entertained at the occasion, Chief Ade-Ojo made the year 2017 Toyota Award Night memorable.

Despite his age, he proved to all that he is neither old-fashion nor aged at heart.

Oil prices sank around 3% on Thursday as OPEC+ confirmed it would only increase output in August as much as previously...
Read more
Load more
198
SHARES
FacebookTwitterSubscribe