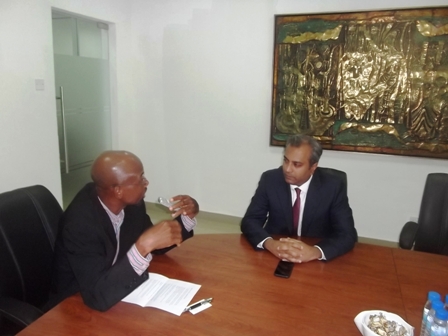 [dropcap]A[/dropcap]fter obtaining a degree in Business Administration from European Business School (EBS), London, in 1997, Mr. Jacky Hathiramani returned to Nigeria the same year to start managing Dana Group. Less than two decades afterwards, the company has munificently made investment impact in various sectors of Nigerian economy, including the automobile industry.

Today, with Jacky still at the helm of affair, the company’s business and investment profile has been jacked up to a momentous level, repositioned as one of the nation’s industrial giant.

More than a decade before the present Nigerian automobile policy came into being; Dana Group, under Mr. Hathiramani’s management, introduced Kia brand to Nigeria and then promised to, in future, invest in auto manufacturing.  Like a dream maker, the vision became a reality with establishment of an automobile assembly plant along Apapa-Oshodi Expressway in Lagos Nigeria, where Motoring World editorial team, led by Editor-in-chief, Femi Owoeye, paid him a courtesy visit recently.

In a brief chat during the visit, Dana boss hinted on what lesson Nigeria could learn from how South Korea developed its auto industry, how Kia became household name in Nigeria and Dana Group’s plan for automobile local content manufacturing.

Mr. Hathiramani also revealed that, despite the magnitude of his daily official assignment, he does not get stressed, because he is a strategic planner.

“We make strategic business plans”, he said. “We remain focused and organized and so I do not get stressed”.

Another reason why Jacky is unlikely to get stressed is, because, we gathered, he is uninterested in hijacking other people’s businesses. He prefers starting with a seemingly insignificant venture, and, like a mustard seed, nurturing it to fruition.  A typical example is Kia automobile. When the brand arrived in Nigeria, popular impression was that it was going to be another joke like Daewoo Racer. But Jacky, a strategic planner, was not only aware of where Kia was coming from as well as the South Korean history of automobile development; he could envision the manufacturer’s future goal.

“I think initial steps that the nation took in the last 18 months, as regards the renewed auto policy, is in itself, the right action and steps, which have been firmly laid on the ground right now”, he explained.  “The policy, as I see it, is a 10-year course of action, which enables the new stakeholders, as investors, to start off with SKD (Semi-knocked Down) stage two, and then gradually progress to SKD stage one before reaching CKD (Completely Knocked Down). The only lessons  we should  learn is to be very consistent in the policy and to learn from the benefits that can be achieved by sticking to this policy, which include growth of the market  and creation of thousands of jobs.

“Currently, as we know, the market size is only 50000 units for brand new cars. We believe that used car market is about 250,000, which means that there is potential for that 250,000 used car market to be converted to brand new car market. And that is obviously what everybody is aspiring to achieve. “

On why and how in recent years, Kia successfully  toppled its sales record and secured a significant position among Inter-brand’s list of global top 100 brand as well as inter-brand’s list of the 50 Best Global Green Brands, Jacky has this to say:” Obviously,  KIA has very high standard, and the quality level is extremely high. They are produced in world class facilities. And, as you know, their models have been growing from strength to strength. Today, they are of very high quality and comparable with even European brands, let alone the Japanese brands. So Kia is there to stay.

When, about a decade ago, Dana became Nigeria’s main franchise dealer for Kia, the nation’s automobile marketing sub-sector was quite competitive. How did Jacky’s company achieve making Kia a household name in Nigeria?

“Being the brand’s authorized exclusive distributors,” he responded,  “what we have tried to do in the last ten years has been to be customer-focused, change the perception of the brand and create a very strong brand equity, which we have been able to do”.

Jacky Hathiramani, though of India origin, is a Nigerian by birth. He is even more an indigene, because his father was also born in Nigeria. His grandparents relocated from India to Nigeria in the 1940s, went into trading business, which became registered as Dana Group. Jacky is of the Hathiramani’s second generation in Nigeria. But as experienced with many surviving family businesses around the world, Mr. Hathiramani’s take-over of the family business’ management in 1997 has resulted in growth in influence, size and profitability.

Yet from the tone of his responses to our questions, Mr. Hathiramani visualizes a rather more colossal and indeed booming picture of Dana as well as nation’s automobile industry.

“We plan to be part of automobile local content development by encouraging local production of automobile manufacturing parts, especially tyres”, he hinted.

[box type=”info” align=”alignleft” ]Currently, as we know, the market size is only 50000 units for brand new cars. We believe that used car market is about 250,000, which means that there is potential for that 250,000 used car market to be converted to brand new car market. And that is obviously what everybody is aspiring to achieve.” – Jacky Hathiramani[/box]

The unique porosity and phenomenal downforce of the Evija all-electric hypercar has been brought to life in a new animation from Lotus.
Read more
EXECUTIVE CHAT

What is popular on Nigerian roads is the main Toyota Corolla. But in South Africa, the Toyota Corolla Quest, which was launched in 2014,...
Read more

Maserati writes a new chapter in its history by expanding its Trofeo collection. Following the 2018 launch of Levante Trofeo, the...
Read more
Load more
113
SHARES
FacebookTwitterSubscribe