Home Features The Ford That Beat Ferrari : A Racing History of the GT40
Features

The Ford That Beat Ferrari : A Racing History of the GT40 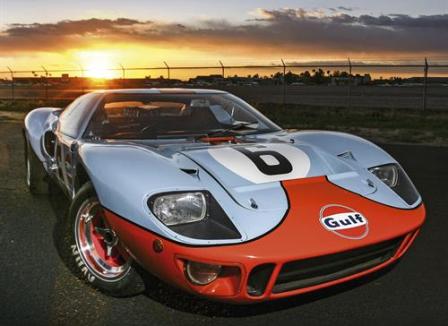 This new edition of a classic book tells the story of the celebrated Ford GT40 through a remarkable array of over 850 period photographs, many of them in colour.

[dropcap]A[/dropcap]fter Ford unsuccessfully attempted to buy Ferrari in 1963, the American car giant instead embarked on its own racing programme in a bid to beat the famous Italian marque at the world’s most prestigious race, the Le Mans 24 Hours, as told in the forthcoming Hollywood movie Ford v. Ferrari.

The mission was eventually accomplished: Ford’s challenger in this battle, the GT40, finished 1–2–3 at Le Mans in 1966 and won for the next three years as well. This book, originally published in 1985 and redesigned in 2005, is now available again due to popular demand, with further revision to keep the information up-to-date.

Co-authors
John S. Allen and Gordon J. Jones are long-time enthusiasts with an over-riding passion for the Ford GT40 and other great cars from the golden era of endurance racing that inspired them when young. Besides their long-term collaboration on this book, they have independently contributed to numerous magazines over the years, and now, ever indefatigable, both continue to work on new books. Both live in France, respectively in the Deux Sèvres and Charente-Maritime areas.

Rolls-Royce Motor Cars early this month (May 4th) recorded another chapter in its long story It was on this day in...
Read more
Features

In the year 2000 Hyundai Motor introduced its first-generation Santa Fe, making the company one of the pioneers in the SUV...
Read more
Features

Why China Will Enforce Electric Vehicle Safety By 2021

Thermal runaway in electric vehicles (EVs) is a major concern for potential consumers, manufacturers and regulators, as thermal runaway of lithium ion batteries is the main...
Read more