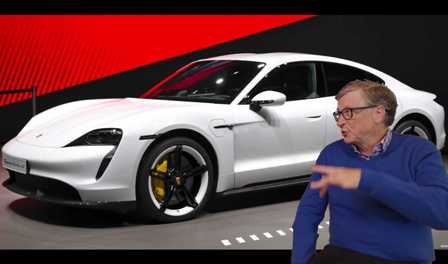 Microsoft’s co-founder, Bill gate, is a conservative auto freak, lover of technology and front-line environmentalist. Therefore, the fact that he bought himself a non-polluting electric vehicle was not unexpected.

Given his investment relationship with Tesla’s sister company, AI Research company, into which Microsoft recently invested $1 billion, question was raised as to why Gate opted for Porsche Taycan, which is about $90,000 than Tesla S.

Responding in a You Tube interview, Gate, who commended Tesla for popularising EVs in the world, confessed that he preferred the Taycan, because “it is cool and fun to drive.”

What does Gate mean by those few words?

Taycan is an electric vehicle. Yes, so are many now on sale in rest of the world. But when it comes to ride and handling, Taycan happens to be one Electric car with road behaviour incomparable with others, including Tesla S.

No wonder, Bill Gate was quoted to have said: “I have to say it’s a premium-priced car, but it is very, very cool. That’s my first electric car, and I’m enjoying it a lot.”

Test-drivers, who have done comparative tests of Porsche Taycan, Tesla S and others, simply rated Taycan as the best so far, not in terms of price, but performance. Taycan is said to be the very first EV to drive like a proper road car.

Because it needs massive battery for longer cruising distance after full charge, the car becomes heavier than its gas-powered siblings. But in addition to equipping the can with Active Anti-roll bars, Porsche positions Taycan’s battery lower to the ground to achieve better centre of gravity.

Results are better road grip, smooth cornering ability at top speed without body roll and smooth steering, which according to Autocar, gives a driver better connection with the front wheels.

“Take the standard adjustable suspension out of its more extreme Sport and Sport Plus settings,” stated in  Autocar’s recently published report. “And the ride comfort becomes surprisingly plush. No matter what speed you’re doing or the type of road you’re driving along, the Taycan is never complaining, even with the fairly enormous 21in alloy wheels that the range-topping Turbo S version wears as standard.”

Honestly, with this alone, if there would be a prize for the best car for escaping from criminal elements, Taycan would top the list. And the rich and vulnerable Nigerians would love the machine.

That’s not all. The car comes with what Porsche terms regenerative brake system. It does what is akin to an electric bicycle. Those familiar with the bike would understand this.

Whenever an electric bicyclist decides to pedal, maybe when ascending a hill, the battery is recharged.

Similarly, whenever the brake is applied on motion, Taycan, via what is termed mechanical friction, pumps back into the battery as much as 265kW of energy. So far, no other electric vehicle has got this ability.

When Electric vehicle was first unveiled few years ago, certain analysts expressed worries that the technology might not be safe on the road, because of its quietness, which is contrary to what the world are used to about automobiles.

Porsche has solved this problem by equipping Taycan Turbo S (as standard) and ordinary Turbo version (optional) with an Electric Sport Sound, which mimics a Petrol-powered Porsche engine.

In that case, while occupants of the car might not hear much sound, pedestrians would actually know and hear the usual engine sound of  a sports car, whenever a Taycan Turbo S is cruising along the road.

BBC Top gear’s Verdict: “Taycan can absolutely entertain on the right road and is a delight to cruise in – a GT with the heart of a sports car. More importantly, it’s a proper Porsche that just happens to run on electricity.”

Autocar’s Verdict: “I think this handsome thing is the world’s best electric car.”

That Bill Gate is a conservative fan and freak of Porsche brand is well known. He has got a garage of Porsche cars. At the same time, following an investment alliance to the tune of  $1billion between Elon Musk-founded AI (Artificial Intelligence) research project and Microsoft, which is jointly owned by Gate, it was not out of place for the former to get disappointed after Gate announced the purchase of his very first electric vehicle, which happened not to be Tesla S.

But Gate loves posh and top quality things, including cars. He can afford posh products. Years ago before the launch of EVs, he had found Porsche brand to be posh. He has got used to road behaviours of Porsche cars, an experience he won’t like to do without. He found Porsche in Taycan.

He added Turbo S to his collections, not simply because it’s from Porsche, but because, for now, when it comes to ride and handling, no other Electric Car can outperform the Taycan EV.

Two Wales rugby internationals well-versed in tough tackling on the pitch are now able to tackle the toughest terrain off it...
Read more
My Life, My Car

How Father and Son Spent a year Restoring VW Beetle

Gregg Ammerman has loved vintage Volkswagens ever since he purchased his very first car, a watermelon green Super Beetle, in 1982....
Read more

With time to spare and nowhere to go during lockdown, many classic-car owners have seized the opportunity to finally make progress...
Read more

How to Control your Emotion on Wheels during COVID-19

Coronavirus has caused stress levels and personal pressure to soar. Whether it is concern for loved ones, pressure of a job losses...
Read more

The London Concours, presented by Montres Breguet, will gather a collection of the most beautiful and innovative soft-tops ever, paying special attention to...
Read more
Load more