…But Motor Mechanics, Technicians Turn up in Thousands

[dropcap]M[/dropcap]aiden edition of first auto show to hold in the mainland of Lagos took off on Monday. Known as Automedics Autofest holding under the LTV Blue Roof, the show is quite small. It is not what you’ll call a motor show. And organizers have not claimed it is one.

It is rather a mini auto party organized to celebrate every relevant people, products and services in the nation’s auto industry. From all indications, Lagos Auto-fest seems a miniature of all that the auto and allied industries stand for.

And given the FREE services rendered to artisans during the one-week event, Lagos Autofest could also be rightly tagged Free Auto Maintenance Training Week, during which thousands of auto mechanics and technicians shall be opportune to update their knowledge about handling the modern day, IT-colonized auto-machines.

In truth, however, contrary to pre-event media hypes, the venue did not surge with the volume of crowd expected, especially auto-loving visitors, maybe because the show is not conceived to attract concept cars and auto-gismos that petrol heads would rather go and see instead of getting bored with premier league.

After the opening ceremony, LTV Blue Roof Area event looked scanty, except for thousands of motor mechanics and technicians, who patiently waited to get into a standing cubicle for a photo.

Stands named after a number of certain supposed exhibitors at the event are signposted but empty, as if such exhibitors changed their minds after all arrangements had been concluded or a bit late to meet up with opening day.

It is, however, believed since it was the opening day of a show that is holding for the first time at an unusual venue, the momentum might build up from Tuesday. Fingers crossed. 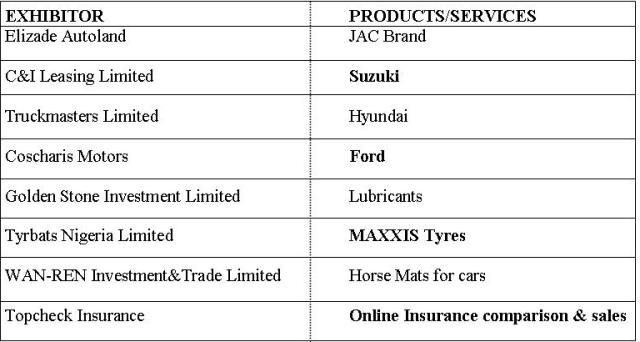