“Why Africans May not Enjoy Electric Vehicle Technology Soon” – by Polish Explorer, Fieldler

Inadequate infrastructure has been described as a major factor hindering the use of electric vehicles in Nigeria and rest of Africa.

A renowned Polish explorer, Arkady Pawel Fieldler, who inaugurated the first ever electric vehicle (EV) expedition with the world’s most popular electric vehicle, Nissan LEAF made this submission recently, when he arrived Nigeria on his way to other African countries en-route Poland , his native country.

Arkady, who was received by  Nissan representative in Nigeria, Stallion NMN, said, ‘’ inadequacy of infrastructures such as charging facilities in the course of my journey is a major limitation to the attainment of complete transition of electric  vehicles in Africa.’’

According to him, travelling across Africa is probably the hardest test for any vehicle.

He recalled: “Poor roads, limited charging infrastructures and dramatically diverse weather conditions from equatorial storms to the scorching heat of the Sahara are just few challenges that we had to contend with in this journey.’’

He was however thrilled by the level of awareness in Africa, saying EVS are not entirely alien to most people in Africa.

He said: ‘’Majority of the people wanted to know why the car was silent and doesn’t use oil or water or emit carbon dioxide(CO2), just as several others asked how farther the car could go after one full charge.’’ 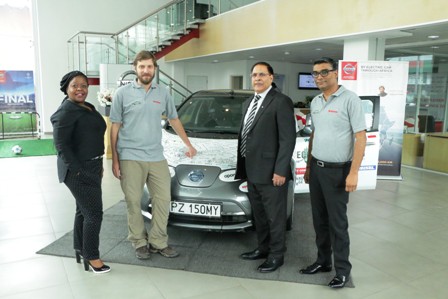 While describing Africans as warmth and hospitable, Fieldler expressed optimism that they will catch up with on-going technology transformation in Europe and America and also embrace electric mobility and new technology as soon as possible.

Also speaking on the issue of infrastructure deficiency in Africa, Head of Corporate Communications, Nissan Group of Africa, Nthabiseng Motsepe said, ‘’ it is not just about assembly and manufacturing electric vehicles. If we have thought of introducing Nissan LEAF into Africa, the challenges will be grid, electricity and also relevant infrastructures.

“That includes partnership with the government and viability. You need to have charging stations and reliability of electricity. Those are the things you must take into consideration when we need to introduce such vehicles within a market.”

The Independent Petroleum Marketers Association of Nigeria (IPMAN) has directed its members to sell petrol at the old rate of N143...
Read more
Nigeria