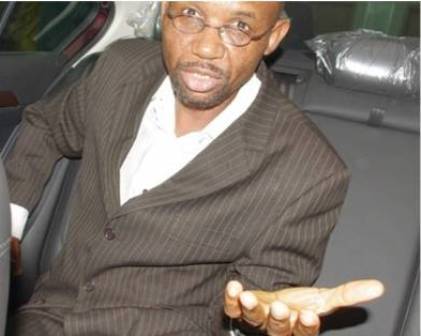 [dropcap]T[/dropcap]his week, the Nigerian Custom Service(NCS) revealed it needed more men to man Nigerian porous borders so as to cope with aftermath of ban placed on importation of vehicles via the land borders.

The Federal government should ignore their demands. It is unnecessary. The NCS have been major part of the smuggling problem over the years. And they still are. Many of them, who should man the borders, prefer manning inter-state and inter-local government borders, collecting money from motorists, who dare to leave their custom papers at home.

How sensible is that. Remove these idle hands and send them to the nation’s porous borders, period. 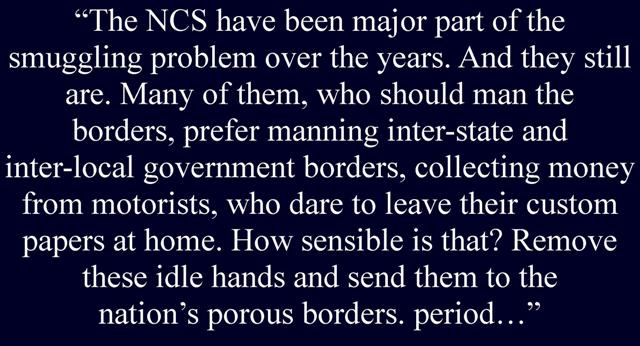 They may argue that they need more men to catch rice smugglers.  Well, local production will resolve that. Once locally processed rice become sufficient and their prices fall far below the smuggled ones, rice smuggling will naturally crackle out.

For vehicles, computerisation is the answer. So there is no need for the federal government to spend scarce resources on recruiting more corrupt officers.

In addition to that, Federal government should create a platform via which a prospective vehicle buyer would be able to use a mobile phone to check whether or not a vehicle has genuine VIN before purchase. This should be followed by a public awareness campaign via radio, TV and online media, warning members of the public against buying vehicles without VIN.

By implication, any vehicle purchased from a smuggler cannot ply Nigerian roads, because it would not have been allocated VIN, as it was not properly cleared via the sea ports. Whoever buys such car won’t be able to buy number plate, road tax as well as third party/fire and theft or comprehensive insurance policy. The vehicle would not be allocated Certificate of Roadworthiness by the VIO, who also share records of all genuinely imported vehicles.   That is a single slingshot that kills multiple evil birds of vehicle smuggling.

And Nigerians, who hate brand new vehicles, can have their beloved used vehicles in a matter of three years, after which locally made vehicles would have become second hand.

Maserati writes a new chapter in its history by expanding its Trofeo collection. Following the 2018 launch of Levante Trofeo, the...
Read more
Load more
4
SHARES
FacebookTwitterSubscribe