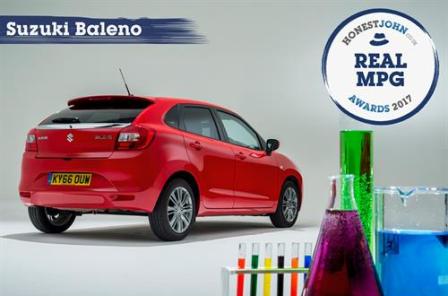 [dropcap]W[/dropcap]ith low fuel consumption becoming even more important these days, Suzuki is pleased to announce that the Baleno was voted the Best Real MPG Performer at the HonestJohn.co.uk awards ceremony held in London on the 18th May.

The award arose from the ‘Real MPG’ section of the HonestJohn.co.uk website that was launched several years ago following complaints from readers that their cars could not match official EC Combined fuel economy figures. Readers can log the true fuel economy that their vehicles are achieving into a database of more than 121,000 Real MPG submissions. The database covers over 2,500 model and engine configurations of cars since 2006.

Dan Powell, managing editor of honestjohn.co.uk comments: “When it comes to real world fuel economy, few cars can match the outstanding Real MPG of the Suzuki Baleno 1.0 BoosterJet. Over the past 12 months, the compact hatchback has outperformed all its rivals for on-the-road economy, averaging an impressive 99 per cent of its advertised figure. This means a typical driver will get 59.3mpg from the super Suzuki.”

The Baleno line up is available from £11,999 for the SZ3 with 1.2-litre Dualjet petrol engine and £13,999 for the SZ-T 1.0-litre Boosterjet, both with manual transmission. Suzuki is currently running a £750 customer saving for the Baleno range until the end of June 2017.

The HonestJohn.co.uk Awards are unlike any others. They aren’t awarded by judges or a panel, instead they come from the best experts of all: the website readers. The main awards recognise and reward the cars that users search for most on the site. Put simply, the reviews which create the most interest among HonestJohn.co.uk users are the winners.

The data to measure this is taken from Google Analytics and calculates the number of page views each review has had over the previous 12 months from April 2016 to April 2017. The site gets around two million visits every month with the majority of these users viewing car reviews.

5
SHARES
FacebookTwitterSubscribe
Facebook
Twitter
Pinterest
WhatsApp
Previous articleWhat Has Car got to do with Beauty and Shea Butter?
Next articleCars Will Soon Be Smart Enough to Make Life-Saving Decisions

Euro NCAP, on Thursday, published its third round of safety results for 2022. The KIA EV6 and the Mercedes C-Class, both large family cars,...
Read more
Load more
5
SHARES
FacebookTwitterSubscribe