Surprising Technology behind the Future of Autonomous Driving

As autonomous driving (AD) technology brings new advances and features to mobility, important questions inevitably arise. For example, how will drivers come to trust their autonomous vehicles? How will vehicles communicate with drivers and alert them to the presence of other vehicles on the road? And, what actions will vehicles take after identifying objects, signs and other road infrastructure such as painted lanes?

Takashi Sunda, Deputy General Manager of the Autonomous Drive Technology Development Department at Nissan, and his team of engineers have developed answers to these and other questions through their work on technology that enables communication between drivers and cars.

In a world of ubiquitous personal devices, we’re already interacting with this sort of technology dozens of times a day — you find it on your smartphone touchscreen, on your computer, and even your home coffee machine.

It’s already a key technology in your car, where it plays a critical role in instrument panels, navigation touchscreens, and parking assistance features.

Sunda’s team is working on a wide range of new technologies that focus on how to better communicate and establish trust between drivers and their cars.

Adding to the complexity, researchers must also factor in the many differences in gender, age, experience, terrain, culture — and even different countries’ rules of the road. 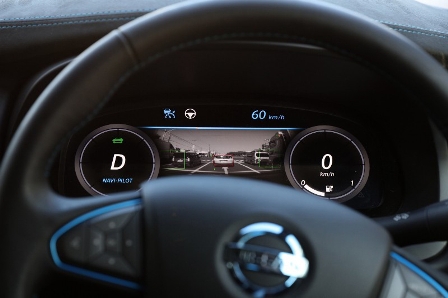 “Driving is so different wherever you go. In France, motorcycles frequently cut across highways, while motorists in the U.S. and U.K. drive on opposite sides of the road,” he said.

“There is much to consider on both an individual level and from a cultural perspective. Driving is very personal and unique.” And that’s, why it’s important to gather as many perspectives as possible, he said.

“Understanding and considering differences is the most helpful,” Sunda continued. “But it can be difficult to grasp at first, so the question becomes: `How do you make that universal step to build trust?'”

For Sunda, transparency holds the key. But as AD technology advances, so must the interface between drivers and their cars.

Once vehicles begin collecting more information in support of new AD features, the systems will need to be able to recognize and react to a range of situations.

What’s more, the technology will also need to quickly communicate all information back to the driver in an easy-to-grasp manner.

“We want even first-time customers to feel comfortable using AD,” he said. “It all must remain simple.”

Drivers will need to know what information the car is collecting and — importantly — what the vehicle is going to do with that data to ensure a safe and comfortable ride.

Consider a scenario in which you are changing lanes and are suddenly approached by another car in an adjacent lane: How will your vehicle convey important information about the approaching car quickly, and what will it do in response?

Or, think about a city corner, when a lone pedestrian suddenly steps off the curb and starts walking across the street: What will your car need to tell you? In these situations, you need to inform — but not overwhelm — users.

“It’s a delicate balance of how much information to control, and how much to share,” said Sunda.

Clearly, autonomous driving will change the relationship between drivers and their cars, but it’s a challenge that Sunda is particularly cut out for.

Before joining Nissan 16 years ago, he worked on developing aircraft-human machine interfaces. When working on those airplanes, he had the benefit of trained pilots who could not only operate the aircraft, but who offered opinions on design.

For the AD project, Sunda’s team members draw on their own driving experiences as well.

But he’s quick to add that his own personal experience behind the wheel is not necessarily going to reflect another driver’s experience. In the end, the big prize for Sunda’s team is a chance to reinvent the future of driving. Sunda said as more autonomous features are available, it will have a revolutionary impact on the way people interact with their cars.

“The change has already begun,” he said. “We are altering the relationship between drivers and their cars — and the experience of driving as a whole.”