Road Test: We Drove The New BMW X2 In Cape Town, South Africa. And Our Verdict Is…

Across the mountainous region of Cape Town, South Africa, I drove the latest bloke from BMW. It is called the X2. This, I would like to think, is a sporty version of the X1. Just as X6 is to the X5 and X4 is to the X3. Although the X2 shares the platform of the X1, it is shorter and lower. It is also wider by as much as 3mm.

Regarding the BMW X2, one thing is clear. It is pleasant to look at, especially the colours that are offered. You have an option of choosing from Misano blue, Galvanic Gold and Sunset Orange. Shortly before the test drive kicked off from the Ritz Hotel,Cape Town (Friday morning),  each test-driver was requested to chose a car to test-drive. I was attracted by the one with Galvanic Gold.  I also took time to savour its stretched, Coupe-style roofline with slim window graphic.

There are more. With the X2, BMW made a history by rolling out a car with the company’s roundel logo on the C-pillar, thereby recreating a detail from BMW Coupes of old. And neighboring its 17-inch Light-alloy wheels are wheel arches with squared-off look.

Front view of the X2 comes with Halogen free-form headlights with LED daytime driving lights as standard or optional full-LED headlights. Also new is the BMW kidney grille with upturned trapezoidal form. On the M Sport X model, the grille’s new design language is reinforced by a design insert in the bumper.

On the rear end of version with 4-cylinder engine are twin tail pipes with 90 mm diameter. As standard is also rear lights with slim L-shaped LED light sources familiar from other BMW models.

It is not an overstatement to say that X2 is loaded with style, in and out.

In terms of comfort, BMW X2 has got high headroom that leaves enough gap between the head of a six-footer and the roof. Depending on your height, the seat could be adjusted upward or downward to get a better view of the road.

Being sportier and shorter than its predecessor, it is a bit less spacious at the rear seats. But on a general note and comparatively with competitors, t is still rather roomy. After all, its boot is bigger than that of Audi Q2 at 470 litres. But the rear seat can be adjusted by 3mm, which impact on the luggage space and mean having to fall the rear seat flat if you need more room.

For other sub-Sahara African countries, including Nigeria, BMW says it would release other engine version in front wheel drive powered by three-litre engine.

I like to note that the car I test-drove is a right-hand drive, meaning the driving wheel is located on the right hand side of the car. Unlike Nigeria, cars meant for South Africa have to be right-hand drive, for they drive on the left side of the road, unlike Nigeria, where we drive on the right side of the road. I found it less challenging, because I had had several years of driving experience on English roads. But unlike United Kingdom, I was not so familiar with South Africa. My previous test-drive was done in Johannesburg. But BMW Group made things easier by making available a Route Schedule, which was very handy during the test-drive, which covered about 300 kilometres. Driving seat sort of corsets the driver, leaving generous legroom and shoulder room. 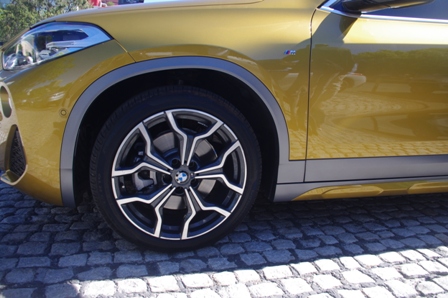 Like I mentioned earlier, I put the turbo petrol derivative through its pace, covering over 200 kilometres across Cape Town. First phase of the test drive started from The Ritz Hotel, Cape Town and ended at a place known as the Shormarket Club, where we stopped for some lunch. From there the second phase of the journey was straight through lots of crawling traffic jams to the Cape Town International Airport.

More comprehensive was The Ritz to Short Market Club’s trip. Covering close to 200 kilometres, I sometimes had to drive through a super-twisty road, feeling like drawing figure 8 severally, using the car as a pencil. During such moments, unlike what you’d expect from a typical Sports Utility Vehicle (SUV), I experienced quite minimal body roll, thanks to its low centre of gravity. Of course,  you can feel the Mini Countryman JCW. 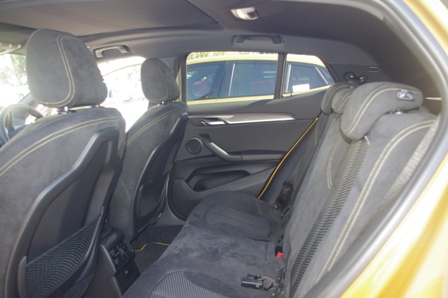 At a straight road, where our route schedule did not indicate speed camera zone, I pushed the car close to about 120km/hour and slammed the brake. Its braking distance was quite impressive. Also extraordinary is the fact that you do not have to take your eyes off the road to know your current speed, as looking straight through the windscreen, your speed  is digitally shown. So in countries with speed cameras, it is easy to escape over-speeding fines. In Nigeria also, it is easy to maintain the legal speed limit without falling into the penalty trap of the Federal Road Safety Corps (FRSC). Set on a sport mode, the X2 drives like a dream.

Incidentally, BMW does not recognize the Audi Q2 as a contender. It believes the Audi Q4, when it is out, will be. But we are yet to confirm if Nigeria’s franchise dealer for Q4 plans to market it in the country. So, for now, when it eventually hits the showrooms in the country, the X2 will have Mercedes-Benz GLA,  Range Rover Evoque and Jaguar E-Pace to contend with.

How much is the X2 going for in Naira? We are yet to know. But, Mr. Makwana of BMW Group confirmed on Thursday that the car would sell with a starting price of R 572 666, which, if converted, translates to almost N18 million.

From my experience, when I drove the car in Cape Town, South Africa, X2, especially the petrol version, which is most likely to be a leading version for Nigeria, BMW X2 is bound to record a higher sales success than its predecessor. Reason? It looks bold and stylish. It is good looking. It is a joy to drive, when set to a sporty mode.

By: LARRY EDSALL As part of the rollout of its e-2008 all-electric sport utility vehicle, Peugeot reminds that...
Read more
Features

More than six years ago, a team of luxury intelligence specialists, designers, engineers and craftspeople assembled to begin development of the...
Read more