As the newest member of the Range Rover family this highly desirable model combines traditional Range Rover luxury with an elegant four-seat convertible design and versatile storage while simultaneously meeting the rigorous standards set by the Land Rover brand; ensuring superior structural rigidity, trademark refinement, and unrivalled breadth of capability both on- and off-road. 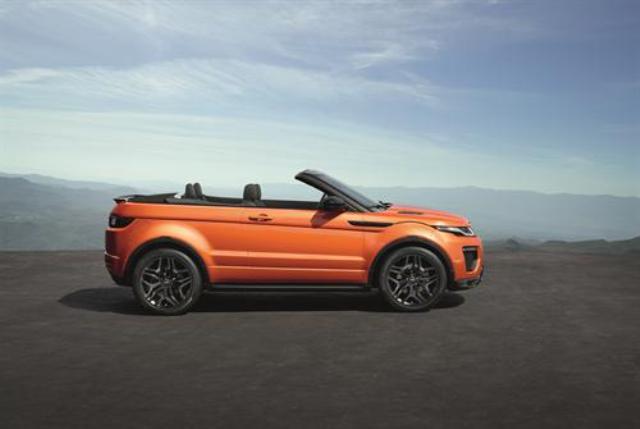 Gerry McGovern, Land Rover Design Director and Chief Creative Officer, commented, “The Range Rover Evoque Convertible is a vehicle for all seasons. Its uniquely distinctive design and world-class engineering add another dimension to the Range Rover family, further enhancing its desirability and appeal.”

The global Land Rover SUV market is forecast to grow by 20 percent over the next five years1 and the Range Rover Evoque Convertible will play a key role in continuing the 45-year Range Rover success story.

The eye-catching exterior design of the Range Rover Evoque Convertible is made possible by a sophisticated fabric roof shaped to create a defined silhouette that remains faithful to the vehicle’s original award-winning design. Its Z-fold mechanism lays flush with the rear bodywork for a sleek, uncluttered appearance when lowered.

The fully-automated roof stows in 18 seconds, and can be raised in 21 seconds, at speeds up to 30mph3. When closed, it provides high standards of refinement with a layer of acoustic insulation ensuring interior comfort on par with the five-door Range Rover Evoque. The 8.9-cu. ft. (251-liter) luggage space offers added practicality.

At the heart of the cabin is an all-new, 10.2-inch touch-screen featuring the next-generation Jaguar Land Rover InControl® Touch Pro™ infotainment system. Making its debut for the Land Rover brand on the Range Rover Evoque Convertible, InControl Touch Pro offers seamless smartphone integration and is available with door-to-door navigation, Wi-Fi connectivity and a premium sound system2.

The new Range Rover Evoque Convertible will be produced at the Land Rover Halewood plant in the UK, alongside the five door and coupe body styles, and goes on sale from mid-2016 in more than 170 markets worldwide.

Euro NCAP, on Thursday, published its third round of safety results for 2022. The KIA EV6 and the Mercedes C-Class, both large family cars,...
Read more
Load more
12
SHARES
FacebookTwitterSubscribe