Going through the list of bills the president signed into law, I found the likes of Federal Capital Territory administration to legally and legitimately provide funds out of its statutory revenue fund for recurrent and capital expenditure, confirmation of the establishment of the FCT Water Board, the National Institute for Cancer Research and Treatment, the Compulsory Treatment and Care for Victims of Gunshot Act and Anti-Torture Act, 2017 and others.

But Nigerian Automotive Industry Development Bill is not included.

While one recognizes the president’s very busy schedule, which has not been helped by the fuel scarcity crisis that stormed the country recently, one would have expected the president to include NAIDB on his priority list.

This same bill passed through the national assembly during the former President Goodluck Jonathan’s regime. And the then president kept it on the backseat till the regime ran out of fuel. So given the fact that it is not a sort of completely new bill, one would have expected the president to give it a priority.

More so, since the present regime is determined to print Nigeria’s name on the world map of industrialized nations and revolutionize employment in the country,  a bill supporting the development of the auto industry (one of the world’s largest employer of labour) should be giving a priority. 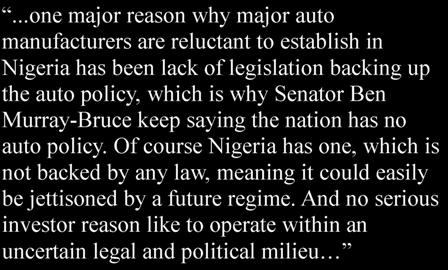 Aside crawling power generation, one reason why major auto manufacturers are reluctant to establish in Nigeria has been lack of legislation backing up the auto policy, which is why Senator Ben Murray-Bruce keeps saying the nation has no auto policy.Of course Nigeria has one, which is not backed by any law, meaning it could easily be jettisoned by a future regime. And no serious investor likes to operate within an uncertain legal and political milieu.

There is no doubt that President Buhari’s regime is revolutionizing the agriculture sector. But how wonderful would it be if the nation’s automotive sector receives half of the attention being paid to agriculture. That will help the economy a great deal. Already, major auto makers are on ground in the country, ready to go into full blast manufacturing as soon as the weather is right.

Appending the NAIDB will boost confidence of auto makers and Original Equipment manufacturers (OEM) around the world.

Printing the NAIDB in the nation’s law book will stop political dillydally in implementation of the drafted auto policy.

Proposed national auto Finance bank can then go on stream, paving way for Nigerians to be able to buy locally assembled automobiles. Sales volumes of locally assembled vehicles will swell, a situation that will encourage the nation’s auto assembly plants to graduate from SKD to CKD.

And by delisting system, the plants will increase local content, which is the real deal, what will generate thousands of jobs. For auto parts manufacturers would have reason to set up plants in Nigeria. The likes of Dunlop and Michelin will see wisdom in returning to Nigeria before other tyre makers take their places.

All President Buhari needs to do to set off this developments and more is just one thing: A signature on the already passed NAIDB.

The president needs to prioritize NAID so that the Nigerian auto industry could have a direction again.

By: FEMI OWOEYE No nation, including China expected a pandemic. But it came. It caught the entire human...
Read more
Kick Starter with Femi Owoeye

BY: FEMI OWOEYE Dear Otunba Niyi Adebayo, Following your appointment as Minister of Industry, Trade and Investment, one of your first move was to order a...
Read more