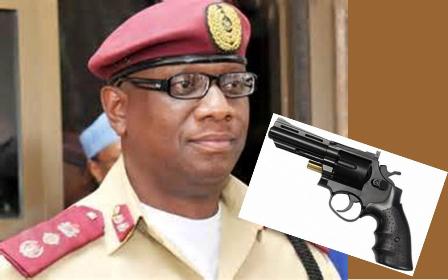 [dropcap]L[/dropcap]ast Sunday, a motorist, who just finished worshipping at a “Winners Chapel” church in Abuja, reportedly attempted to gun down an armless official of the Federal Road Safety Corps(FRSC) for daring to ask him to wear seat belt.

As reported, the suspect, driving a car with registration number: SD01 RBC, had on board his wife and children. He allegedly pulled a gun at the FRSC officials. What a lesson for children!

Action of the gun touting “Christian” is not only ridiculous. It speaks volumes about the rots that Nigeria nation has suffered over the years. Just imagine, somebody claiming to be coming from a CHURCH, attempting to act like Judas Iscariot? But, Biblically, won’t Judas have been more justified?

First of all, the General Overseer of The Living Faith Church should be concerned about this kind of behaviours exhibited by somebody, who just came out of his church. It raises a question of safety of lives in the so-called big churches. What if he has a simple argument with a Church member outside the Church premises? Bloodshed? And then what? Or is this an era in which Christians would need to be armed with pistols, while going for services?

Are we heading for an era in which those, who can’t afford pistols would manage their granddad’s handguns?

On a serious note, it’s no use circulating the suspect’s video. After all, the FRSC officials captured his number plates. Whether he hired or borrowed the Honda car, it should be in the Commission’s registered vehicles database.

Trace him. Arrest him. Charge him. If found guilty, get him sentenced so that his case could serve as a deterrent to others like him, who for all these rotting years, have thought they are above the law.

Who was he? I wouldn’t think he is a top army officer. No, I wouldn’t think so. Officers of that cadre know better. Whoever, the culprit is, the case should not be treated with kid’s glove at all. FRSC officials represent the power of this nation. They carry no arms. But they represent all of us, I mean the entire citizens of the massive landmass known as Nigeria. Implication of the culprit’s action, therefore, is that he has technically pulled a gun at the president of the Federal Republic of Nigeria. He has pulled a gun against us all. What offence has the Marshal committed? Asking him to use seat belt so that his lives and that of his spouse could be safe in case of an accident?

Just for that, he wanted to gun somebody down?

No. It’s absolutely preposterous, maddening and reprehensible. Please, get him to face justice.

Dealing With the Deadly Concoction of Disease and Disaster

By PATRICIA SCOTLAND (Commonwealth Secretary-General) Today in India and Bangladesh, millions of people are hunkered down in shelters,...
Read more
Kick Starter with Femi Owoeye

By: FEMI OWOEYE No nation, including China expected a pandemic. But it came. It caught the entire human...
Read more
Contributors