That two administrations found it impossible to get Nigeria’s new auto policy written in the nation’s statutes book is anomalous. Between 2011 and 2015, the bill got as far as President Goodluck Jonathan’s desk. An insider of the then administration argued that the president could not sign the bill due to pressure on him during his last days in office. My response to that is: Bollocks.

Under your administration, which started in 2015, the bill again scaled through both legislative chambers, though not earlier than November 2017. But it could not even make it to the presidency for signature.

From the foregoing, doesn’t it seem as if, for selfish reasons, certain forces are bent on preventing the national Automotive Industry Development Plan (NAIDP) bill from being recorded in the nation’s law book? Unless the presidency makes a last-minute push, that bill is already trapped. Painfully, with impunity, culprits know that no one would ask questions.

Why it never reached the President’s desk

My investigation revealed that, for the bill to leave the upper legislative chamber for presidency, a sum of N10 million was expected to exchange hands. Call it lobbying. 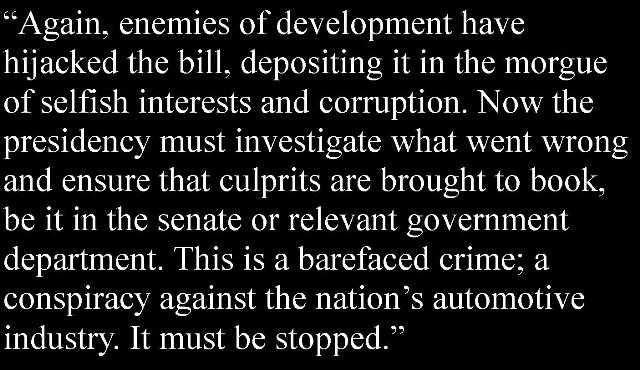 As alleged by my source, a personnel of National Automotive Design and Development Council (NADDC)responsible for liaison with the National Assembly, was expected to pay the cash to gatekeepers in the senate’s legal department.

But because the needful was not done, the bill was allegedly locked away, never transmitted to the presidency, a situation that should have elicited reactions from NADDC, presidency and even members of the Nigeria Automotive Manufacturers Association (NAMA).

Questions are: Was any money approved for the NADDC to lobby or follow up the bill so that it could cruise safely to the Aso Rock? If yes, who was supposed to pay the money? When was it paid and to whom? Could it have been paid to a wrong person or was the amount paid not enough? If there was anything like the foregoing,

Your Excellency needs to demand an explanation from whoever is involved. Or was there no money allocated at all? It’s important to get to the bottom of this matter.

Most vital question is: Why on earth does the senate’s legal department need N10 million, just to clean a bill and transmit same to the president? Is the huge sum meant for postage stamps or transportation to Aso Rock?

How come, more than a year after the bill should have been transmitted to the presidency, no one, none from the presidency, Ministry of Industries or NADDC has raised an alarm? Who is conniving with enemies of the nation’s auto industry? Who? Something is not right. I am not saying most things are right with our corruption-ridden National Assembly. But this is a matter having to do with a sector as vital as the automotive industry, one of the largest employers of labour in the world.

More: Why the seemingly blasé attitude by the stakeholders? After all, its full implementation would benefit them all. NAC fund would have to be invested in Auto Finance bank. Vehicle importation would have to be curtailed. As a result, local assemblers would be able to increase production/sales volume.

Tracked down for an interview at the Nigeria Auto Journalists Association’s (NAJA’s) Annual Award held in December 2018, NADDC’s Director General, Mr. Aliyu Jelani simply downplayed the effect of non-passage of the bill.

His response: “When we talk about auto policy, it’s already in effect. What you are talking about now is for it to become law to stop what they call policy somersault. But in terms of the effect it has, we are already seeing those results. So hopefully, it would be out of the national Assembly very soon.”

That interview was conducted about mid-December 2018, over a year after the said bill had been passed by the national Assembly and about two months to the 2019 General Election.

Truth is that the bill is stuck. Unless a quick miracle happens, the bill will rot in the detention of the Senate’s legal department. And, whoever wins the next presidential election would have to start all over again, if they feel inclined.

That’s where we are.

So would it not be right to believe that the same anti-auto manufacturing forces, which are bent on frustrating the efforts of the nation’s auto industry, have, once again blockaded the bill from getting to President Buhari for signature, with corruption playing a big role?

Why does NADDC, which supposedly packaged the bill on behalf of the federal government, feel so comfortable about what became of it?

Yes, according to Jelani, NADDC is implementing certain contents of the policy. But he also confirmed that the council had to start consultations again for setting up of auto finance Bank, an important ingredient of the policy meant to help local auto assemblers to increase volume so as to attract Original Equipment manufacturers (OEM), the ultimate goal of the policy. Jelani’s response in the interview indicates that plans for auto Finance bank, which had earlier reached an advanced stage, had to start all over again.

This is what you experience, when there is no legal framework.

A typical example is the Federal Road safety Corps (FRSC). Had stakeholders not pushed for its being legalized, FRSC would have been scraped long ago

Without a policy backed by law, no amount of implementation would fully win investors ‘confidence. Auto business goes beyond politics.  We cannot be going in circles forever. After inviting most auto makers to set up manufacturing in Nigeria, rather than creating a true enabling environment for them to survive, NADDC seems to prefer building a house without an approved architectural plan. Instead of encouraging Nigerians to buy locally assembled vehicles and so increase volumes, NADDC is planning going back to designing a Nigerian car. Again? What happened to the one designed by Engineer Ugwu in the late 80s as a result of which billions of Naira went down the drain.

I think what serious local manufacturers need at a time like this is an auto finance bank, a key provision in the Auto Policy. WESBANK visited Nigeria for this purpose. It saw a potential. It was ready to kick-start it, if only Nigeria was ready. It never happened. Last we knew was that an application for Auto Finance Bank was submitted to the Central Bank of Nigeria (CBN). No one seemed to do any follow-up, just as the case of NAIDP bill, which passed through the parliaments but got stranded on the way. And no one is asking questions.

Even the ultimate beneficiaries of the NAIDP are as quiet as a graveyard.

So, four years of another administration, the nation’s auto policy would not enter the nation’s statutes book?

Does it mean your excellency has, once again, allowed enemies of development to hijack the bill, depositing it in the morgue of selfish interests and corruption. Automotive industry is too important for this sort of joke. The presidency must investigate what went wrong and ensure that culprits are brought to book. I believe a barefaced crime has been committed; a conspiracy against the nation’s automotive industry. It must be stopped.

Dealing With the Deadly Concoction of Disease and Disaster

By PATRICIA SCOTLAND (Commonwealth Secretary-General) Today in India and Bangladesh, millions of people are hunkered down in shelters,...
Read more
Kick Starter with Femi Owoeye

By: FEMI OWOEYE No nation, including China expected a pandemic. But it came. It caught the entire human...
Read more
Contributors