[dropcap]T[/dropcap]he oldest Volkswagen Beetle in South Africa has been entered for Concours South Africa 2017, which takes place at Sun City on 4-6 August.  The little fawn-coloured Peoples Car is a 1949 model sedan, built in Germany, and imported to South Africa by a private owner.

What makes this Beetle entry even more interesting is the fact that it is owned by AutoPavilion, the official Volkswagen Museum in South Africa, located at the factory in Uitenhage, Eastern Cape..

“We have been very excited about Concours South Africa, and we will evaluate this year’s event to see if it makes sense to bring a bigger selection of vehicles from Uitenhage in 2018 and use this opportunity to profile our AutoPavilion ,” said Matt Gennrich, General Manager Communications  for Volkswagen South Africa. “An event like this plays an amazing role in increasing awareness of our rich motoring heritage in South Africa.

“This is our first big show outside of the Eastern Cape and we decided to go ahead and enter one of our best restoration in Concours, which happens to be the oldest known surviving Beetle in the country. And make no mistake, we aren’t entering Concours 2017 with the idea of simply showing the car. We want to win it!”

The car in question has had an interesting history, as befits a 68-year-old car. It was built just three years after the Volkswagenwerk in Wolfsburg, Germany was rescued from ruin after sustaining severe Allied bombing between 1939 and 1945 in World War Two

Ironically, it was an English army group, tasked with overseeing the Wolfsburg area immediately after World War Two that realised the best way to clothe and feed the starving population in the area was to make the Volkswagen factory, used for military vehicle production during the war, a going concern as soon as possible. The Volkswagen sedans that then began trickling off the “production line” – still suffering the aftermath of the chaotic years just past – were sold to the Allied occupying forces in Germany for use as transport.

So successful was this team, led by a certain Major Ivan Hirst, in setting up production and sales pipelines, that by 1948 the factory was then handed back to German management, falling under the leadership of former Opel production expert, Heinz Nordhoff.

Thus the 1949 Volkswagen export model that arrived South Africa was a product that, just, three years prior, would have been deemed to have been an impossibility by many!

Volkswagen production in South Africa commenced in late August, 1951, at a new plant in Uitenhage established by what was then known as SAMAD, (South African Motor Assemblies and Distributors), which also built Studebakers and British Austins. The VW-South African tie-up was brokered by the famous Baron Klaus von Oertzen, a man who was instrumental in the inception of the famous 320 km/h Auto Union racers in pre-war Germany, designed by Ferdinand Porsche. 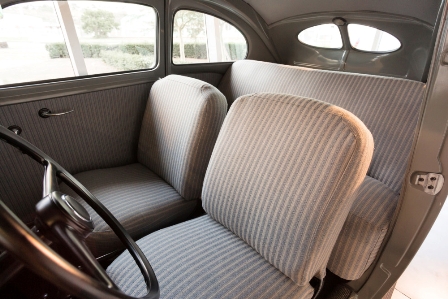 Von Oertzen managed to get approval for the Volkswagen assembly contract from the South African government by brokering a deal that involved the export of copious quantities of South African wine to Germany!

This 1949 Volkswagen sedan – the term “Beetle” was not used by the factory – surfaced in South Africa in Middelburg, Mpumalanga, in 1971, after a national competition run jointly by the magazine Wheels and Volkswagen South Africa to find the country’s oldest Beetle. The car was at this time owned by a Mr David Rubin, who was then given a brand new 1300 Beetle in exchange for the classic.

Christened as simply “Jan”,  the 1949 bug went on display around South Africa before coming home to rest at Uitenhage, where it went into storage and eventually fell into a state of minor disrepair.

Just over a year ago, “Jan” was rescued by a man of the same name, a certain Jan Schiedeck-Jacht, who also happens to be Head of Product Engineering at VWSA in Uitenhage.

Mr Schiedeck-Jacht organised a team of enthusiasts from Product Engineering at Uitenhage to embark on a restoration project.

“The car was stripped right down to every last nut and bolt, with the body removed from the floor-pan, and every part was either refurbished or replaced with original parts,” says Matt Gennrich. “Or, in the case where parts were unobtainable, they were made in our Product Engineering facility.”

In an amazingly short time of just seventh months, the fully-restored 1949 Volkswagen sedan was back in showroom condition. With a power capability from its 1100 cc air-cooled boxer four-cylinder engine registering all of 18 kW, just as it had in 1949, where the stated top speed was a shade over 100 km/h.

Paying tribute to the efforts of his Product Engineering team, VWSA managing Director Thomas Schaefer said he was “humbled by the dedication, passion and love of our automotive heritage that this team has shown during the restoration.”

Now, at Concours South Africa, the team’s work will come under the stern scrutiny of a top international panel of judges, led by Wayne Harley, Curator of the Franschhoek Motor Museum. And the humble little 1949 Beetle will be up against some of the finest veteran, vintage and classic cars in South Africa.

Concours South Africa 2017 at Sun City runs from Friday 4 August to Sunday 6 August, 2017. The event  opens with  the HAGI Conference on Value in the Classic Car Market www.vccm.co.za on Friday morning.

While this conference will undoubtedly attract collectors entering their cars in Concours South Africa 2017,  it is open to anyone interested in classic and collectable cars from an investment point of view. Already a coterie of portfolio managers and hedge fund gurus are signed up.