100 Great Women in British Car Industry to Be Named 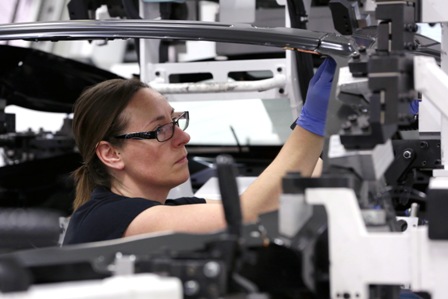 The initiative, launched last year, was set up to highlight the success of the highest-achieving women in the industry, putting a focus on leaders and rising stars in order to recognise their achievements and inspire others to follow in their footsteps.

Nominations for the top 100 female rising stars were led by the Society of Motor Manufacturers and Traders’ (SMMT) membership and came from employers across the automotive sector. The 100 female rising stars were then selected at a judging day led by Rachael Prasher, Haymarket Automotive’s Managing Director, Jim Holder, Steve Cropley and Rachel Burgess from Autocar’s editorial team, plus the SMMT’s Chief Executive, Mike Hawes and Director of Communications and International, Tamzen Isacsson.

Autocar’s editorial team then team selected an overall winner, plus a winner from each of the categories being assessed: vehicle development, manufacturing, retail/sales, marketing, communications, apprentices, design, HR and executive. The judging process was backed by extensive input from automotive executive search firm Ennis & Co.

“By highlighting the very best rising stars in the industry we work in and love we look forward to building on the success we enjoyed last year,” said Prasher. “I was delighted that so much of the industry took the time to nominate so many brilliant candidates, and it was an extremely tough job to whittle the long list down, for which I must extend my thanks to the SMMT and Ennis & Co. Now we are ready to put our top 100 female rising stars in the spotlight and do all we can to inspire them to greater heights and to encourage others to follow their example. I’m so delighted that we have been able to assemble such a strong line-up of speakers for event at Twickenham to kick-start this process.”

Ennis & Co’s founder Lynda Ennis was especially pleased to partner with the initiative in 2017, saying: “There must be a pipeline of talent nurtured at the beginning of a career, so that when today’s leaders leave the stage there is a steady and plentiful supply of talent flowing through to follow them.

“The Industry must now concentrate on encouraging and developing that talent early. It is not enough simply to talk the talk, sign up to self-help gurus and tick the box on diversity, firms must follow through with real action and that’s why we’re supporting Autocar’s Great British Women in the Car Industry event in 2017.”

The top 100 female rising stars will be revealed at midnight next Wednesday, June 21, ahead of a day-long event celebrating women’s involvement in the car industry at Twickenham Stadium.

The event will feature keynote addresses from experts from within and outside of the car industry, including former Secretary for State, Business and Innovation Sir Vince Cable, Fiona Spowers, director of the Riversimple hydrogen car company and former head of disruption at TBWA and Paul Geddes, CEO of Direct Line Group.

“Ennis & Co has been a great partner this year, helping us to really drill down to what matters when identifying rising talent,” said Jim Holder, editorial director of Autocar. “With so many entries, judging would have been an incredibly daunting task without the help of Ennis & Co, so we’ve been extremely grateful for the support and insight.”

As well as Ennis & Co, the Autocar Great British Women in the Car Industry – Rising Stars event is supported by the Society of Motor Manufacturers and Traders (SMMT), and backed by Direct Line Group, Ford, Jaguar Land Rover and KPMG.