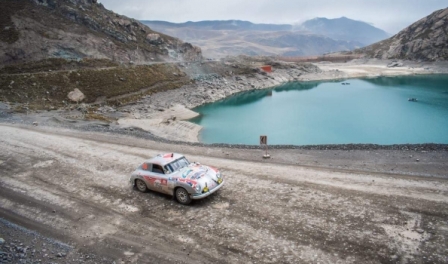 Seven years ago, when Colorado-based mother and wife Renee Brinkerhoff decided to completely change her life to become both a racer and global philanthropist, she never envisioned her efforts could also change the lives of women and children worldwide.

However, since 2013, her race team Valkyrie Racing and foundation Valkyrie Gives have earned global recognition for her personal quest to end the plight of human trafficking on an international scale. And she’s about to conquer the ultimate challenge as the first to ever bring a vintage Porsche to Antarctica and drive 356 miles on ice, as the conclusion of a 7-continent journey that will have spanned nearly 20,000 miles around the globe to bring awareness to and raise funds for the cause.

According to Renee, the forthcoming winter expedition will be a trifecta of sorts, with an end goal of raising $1 million through her ‘Project 356 World Rally Tour’ – an effort alone that has already secured more than $200,000 toward her goal.  “Antarctica will be the most beautiful, yet dangerous terrain we’ve yet to encounter with ourselves and our vintage car,” she explained.

“While the weather remains one of the largest hurdles, it’s going to be our technical mission to lightweight the car and stay on track in a carbon positive way,” said Renee.  “We’ve got a team that has already earned a world record in polar exploration, and we intend to set a few of our own along the way!”

Joining Renee as her navigator will be Jason de Carteret, a British polar explorer who has held both skiing and vehicle world records for polar exploration. “Our upcoming fete will be an amazing crescendo in the epic journey Renee has already created on a global scale,” said Jason.  “There is an enormous educational lesson to be learned in all she’s doing, let alone the history and heritage that her car provides.”

For a small woman, Renee has created an immense voice for a deeply rooted exploitation of human beings.  Her involvement has not only broadened awareness, but she personally brings much needed funds, support, education and supplies to pre-vetted shelters she meets with globally that house women and children who are both survivors and victims.  Personal meetings and on-site involvement have already taken place with organizations in remote areas within China, Mongolia, Peru and Kenya.  Each contribution begins a means to educate and support those that have survived human trafficking while taking instrumental steps to foster awareness that can help to end the global issue completely.

Additionally, this past January, Renee was selected by the U.S. NGO Exodus Road to be part of a carefully vetted and selected group of volunteer operatives to head to Asia, where she embarked on an anti-human trafficking effort to rescue and restore victims, including children who are sex trafficked.  The investigation was part of an evidence gathering effort to build stronger cases for successful rescue missions for police on a global basis.  Within a team consisting of former Army Special Forces and current members of undercover US law enforcement, she was able to secretly meet with children and prostitutes to gain insight leading to imminent arrests —  their overall efforts will be supporting the work of nationals on the ground fighting sex trafficking with local police partners.

Renee’s Porsche 356 is currently prepping in the UK for her most extreme adventure – her next destination of 356 miles driven on ice in Antarctica to complete her near 20,000-mile venture for ‘Project 356 World Rally Tour.’  The dramatic conclusion has the potential of setting a world record for rallying a vintage car on all seven continents, as well as a landspeed record within Antarctica.  Her cause-related efforts will continue well into 2020 and 2021 through lobbying endeavors, her volunteerism within the investigative arena throughout the world, as well as within speaking engagements and panel discussions.

After beginning her rally career at the age of 56 in 2012, Renee was determined to take on her own self-imposed challenge of completing six endurance races in seven continents and utilize the world stage of endurance racing as a channel to support charitable efforts.  By extending her own personal philanthropic mission on a global level through her dedication to fight child trafficking, a cause she has championed throughout her racing involvement, Renee has spoken at orphanages, engaged hundreds of foreign children and provided education to keep children safe.

The charitable effort grew by balancing her rally car competition, Valkyrie Racing, with her own non-profit ‘Valkyrie Gives.’  Her determination sought donations and direct financial support to counter child exploitation and human trafficking in poorer parts of the world – and her rallying became a visual means to grow the awareness.

Individual fundraising programs to date have raised more than $200,000 and Renee will be continuing to distribute those funds in the form of practical gifts and educational support.  With a mission to raise $1 million through ‘Project 356 World Rally Tour’ efforts, Valkyrie Gives will be contributing 100% of all dollars raised to the cause.

Through her own personal drive, Renee brings a global perspective to her own enthusiastic vision – along with a dedication to never quit.  Her prior rally experience has ranged from earning class victories in the dangerous and highly acclaimed La Carrera Panamericana race which she has participated in for four years in her car, to making history as the ‘only woman-driven team to finish the race each year she has partaken.  Additionally, her team has podiumed each of the four participating years – winning two first place and two second place victories.

Jaguar Racing has confirmed that the Jaguar I-PACE eTROPHY series will conclude its second season in Germany with seven rounds in...
Read more
Motor Sports

Following on from MotoGP’s calendar announcement, PETRONAS Yamaha SRT and his riders Franco Morbidelli and Fabio Quartararo, are looking forward to...
Read more