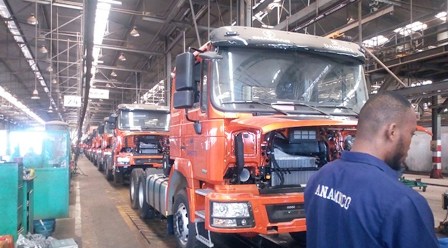 It made the assertion on Thursday via an email to the stakeholders of the industry, asking for imputes to a new manufacturing industrial blueprint requested by the federal government.

“This sector has a great potential for reviving the manufacturing sector in Nigeria,” MAN stressed, adding, “The country imports a high volume of vehicle especially used ones.

“It is therefore clear that local demand for vehicle is high enough to sustain the existing companies and accommodate more investment.

“The sector has very high potential for employment generation and product linkages involving automotive component manufacturers as well as development of Small and Medium Scale Enterprises.”

The manufacturing body, however, lamented that the auto industry is unable to fulfil its potential due to a number of problems, including low local patronage, non-implementation of government policy on patronage of made-in-Nigeria products, lifting of ban on importation and subsequent lowering of import duties, which resulted in influx of both new and used automobiles, most of which are not environment friendly.

It also pointed at absence of basic engineering industries, including flat sheet to supply the component needs of the sector, side-lining of the sectoral group at the drafting of the National Auto Policy prepared by the Federal Government, as well as indiscriminate granting of Bona-fide Manufacturer status to traders, which constitutes a threat to the Automotive Industry structure in Nigeria.

MAN bemoaned a situation in which the nation’s auto market is flooded with used cars being imported into the country at low tariff, coupled with lack of encouragement of Local component manufacturers through the existing Auto policy and insufficient Motor Vehicle Credit Finance Scheme to drive the investment in the auto industry, despite high cost of locally produced vehicles.

Notwithstanding, in response to the FG’s demand for a new manufacturing industrial blueprint MAN asked members of motor vehicle and miscellaneous sector group for their imputes to the proposed Manufacturing Industry Plan for collation and transmission to the federal government not later than Monday (6th July 2020).

Although it had in the past presented similar blueprint to the government, a new draft, according to MAN, becomes necessary, as issues articulated in the old document had become obsolete, hence the need for a review of some of the issues currently affecting the businesses in the sectors.

It explained: “It is, therefore imperative that we review some of the issues currently affecting the businesses in the sectors and reflect these as in the former document, which will be part of the whole documents that will be captured as Blue Print to be harmonized by MAN Secretariat and submitted to government.”

Fuel Cell Electric Vehicles, What Their Future Looks Like

Stallion Auto Keke Limited, a subsidiary of Stallion Group, on Friday, made public its acquisition of Bajaj dealership, an event, crowned...
Read more