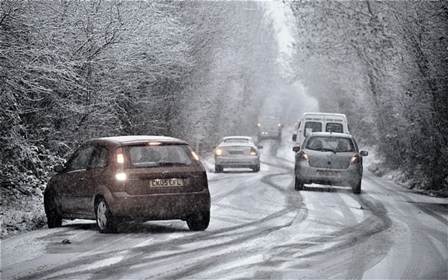 In the wake of the worst storm to hit the country in seven years, new research has revealed one in five motorists (19 per cent) say they had no experience of driving in any sort of bad weather when they passed their test.

[dropcap]T[/dropcap]he research was conducted with 1,000 motorists on behalf of Young Driver, the UK’s largest pre-17 driving school, to find out how prepared the country’s motorists feel getting behind the wheel in more difficult weather.

Even without conditions being as dangerous as those created by Storm Ciara, one in five (21 per cent) admitted they don’t feel confident driving in rain, whilst 46 per cent said they felt unprepared to take to the roads in icy or snowy conditions. Fifty two per cent of female drivers said ice made them nervous, as opposed to 39 per cent of men.

Those aged 25 to 34 were the most confident in bad weather, although still 18 per cent worried about getting behind the wheel when it was raining, and 28 per cent when it was frosty. Driving in rain was most likely to worry the youngest drivers, aged 18 to 24 (28 per cent).

Statistically, February is the month when the UK is most likely to experience snow. According to the Met Office, the UK gets approximately 23 days of snowfall each year and on average it falls 3.9 days in December, 5.3 days in January, 5.6 days in February and 4.2 days in March.

Sue Waterfield, head of marketing at Young Driver which offers driving lessons for 10 to 17 year olds, said: “Obviously when conditions are as bad as we have seen in the last week, the advice is not to travel unless absolutely necessary. But living in the UK we often have rain or frost over the winter months and motorists do need to be confident that they know how to handle their vehicle if they’re driving in those situations. Unfortunately, it seems many feel they were unprepared during their learning journey, with one in five new drivers never having experienced driving in any kind of difficult weather. It’s one of the reasons we suggest extending learning over a longer period of time, as it gives people a chance to try driving in lots of different weather conditions and in varying levels of light, whilst they have a qualified instructor beside them in a car with dual controls.”

Young Driver has delivered more than 750,000 driving lessons for 10-17 year olds at 70 venues across the UK. Private venues are transformed into realistic road systems and lessons are given in dual controlled Vauxhall Corsas by fully qualified instructors. Youngsters learn how to safely control a car, as they would at 17, with roundabouts, junctions, traffic lights and parking spaces to add to the experience. In addition to the standard lessons, Young Driver also runs special Skills Days at selected venues, working on more advanced techniques such as motorway driving; dynamic handling, including brake and avoid exercises; emergency braking; advanced steering practice; observation and hazard perception; and the use of ESP safety systems and ABS.

The Morgan Motor Company has this week finished production of its last-ever steel chassis car to be built. The momentous occasion...
Read more
Around-the-World