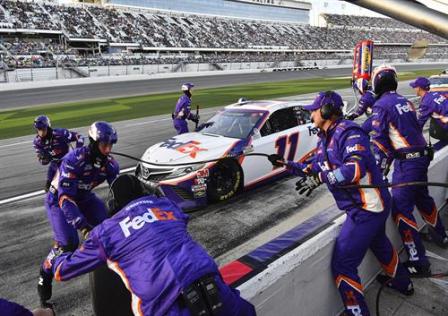 Denny Hamlin won the Daytona 500 on Monday evening to give the Camry driver and Toyota back-to-back victories in the season-opening race that was postponed due to rain on Sunday.

[dropcap]H[/dropcap]amlin beat Ryan Blaney to the line by 0.014 seconds in overtime of the NASCAR Cup Series race to capture his third Daytona 500 trophy in the last five years. The Camry racer led three times for 67 laps (of 209) at the 2.5-mile Florida superspeedway, which saw competitor Ryan Newman wreck as the field took the checkered flag.

“I think we take for granted sometimes how safe these cars are,” said Hamlin following the race. “We’re praying for Ryan (Newman). Worked really well with Ryan through this whole race. Proud of our whole FedEx team. I don’t even know what to say, so unexpected. I knew they were going to come with a big run there. My job was to just make sure I didn’t put a block up where they would wreck me so I could make it to another corner. We got to the 12 (Ryan Blaney’s) bumper and got the push from there. I knew I was going to give him a big run. The race wasn’t over and obviously it worked out well for us there at the end. Proud of this whole FedEx team. It’s great to have my girls here and the team celebrating back-to-back. I can’t even tell you what it means to me.”

The victory ties Hamlin for the third-most wins in Daytona 500 history.

“We had a good day,” said Burton, following the race. “We fought back from a lot of adversity. We got damage. My team did a good job repairing it. Just really proud of our guys. We had a tough day. I think that there were a couple times in the race that we were down and out, and our guys clawed it out. I was proud of that effort.”

Burton was pushed to the finish by fellow Supra driver Timmy Hill who finished the race in the third position, marking his career-best NXS result. Hill was followed to the line by Brandon Jones in fourth, who started the season with a top-five finish for the second straight year.

“This is really a big start to the season,” said Kraus. “Coming into this race, I didn’t really have any drafting experience at all, so we learned a lot in practice and in the race, we kind of just bided our time. We survived all night. I just rode in the back with Ross (Chastain) there, and we kind of had a strategy there going into the race, and we executed the strategy and we ended up fourth.”

Defending race winner Austin Hill led twice for a total of 11 laps (of 106) en route to a sixth-place finish. Riley Herbst started the race from the pole, but a late-race accident forced him to finish outside the top 10 in the 12th position. Grant Enfinger was the race-winner on Friday evening.

Racing action moves out west this week as NASCAR travels to Las Vegas Motor Speedway for races in all three national series along with the ARCA Menards Series West, which opens its season on Thursday. The Truck Series race takes place on Friday, February 21 and will be broadcast on FS1 at 9 p.m. ET. The Xfinity Series race is Saturday, February 22 with coverage on FS1 at 4 p.m. ET and the Cup Series race will be on FOX beginning at 3:30 p.m. ET on Sunday, February 23.

NHRA competes this weekend at Wild Horse Pass Motorsports Park in Phoenix, Arizona with coverage of the finals on Sunday, February 23 beginning at 9 p.m. ET on FS1.

Last weekend’s season-opening Australian Grand Prix in Melbourne was cancelled, following McLaren’s withdrawal from the race on Thursday, after one of...
Read more
Motor Sports