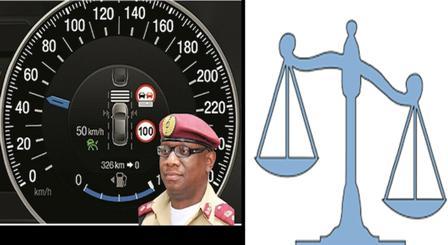 The Federal High Court sitting in Abuja has thrown out a case instituted against Federal Road Safety Corps (FRSC) by Registered Trustee of International Human Rights and Anti-Corruption Society for lack of merit.

[dropcap]I[/dropcap]n suit Number:FHC/Abj/CS/805/15,the human right group had challenged the powers of FRSC to introduce Speed Limiter, but the Federal High Court presided over by Justice Chukwu described the position of the organization as lacking in merit.

The Corps Marshal of FRSC, Boboye Oyeyemi, who was full of praise for the Judiciary, especially the courage of the judge who delivered the ruling said, ”it is the interest of Nigerians that propel us to device methods of reducing road traffic crashes further after discovering that Speed accounts for a larger proportion of causes of crashes in Nigeria”, adding that, ” the judgement will certainly propel us to do more in curbing the rate of road crashes in Nigeria.”

In his words, the Spokesman of FRSC, Bisi Kazeem described the judgement as a landmark ruling.

He said: ” The Speed Limiting Device Initiative which has raised concerns in the polity among different interest groups will now gain ground with the ruling.”

Kazeem stressed that the court had held that FRSC acted in line with its statutory powers by introducing, imposing and implementing the use of Speed Limiting Device in Nigeria.

According to him, the judgement has emboldened the commission to continue to strive and work towards achieving the 2016 strategic goals.

He assured that the corps is positive that with the introduction of the device, Nigerians and all FRSC’s major stakeholders will notice reduction in crashes.

Kazeem said, “It is in the interest of the corps Marshal to see a situation where this preventing measure put in place works for the best of Nigerians.”

It will be recalled that the Speed Limiter has the approval of President Muhammadu Buhari and the implementation date was originally April 1, 2016 before concerns were raised about the innovation.

Following the recent court verdict, the Corps has appealed to all Nigerians to see the initiative as one that is in the interest of the motoring public.