Searching For a Model Nigerian Car 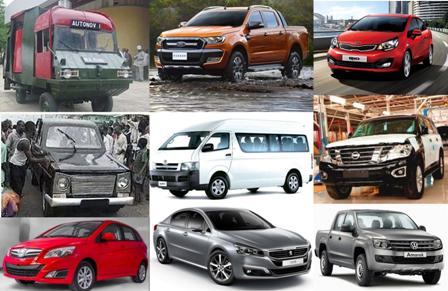 [dropcap]F[/dropcap]ollowing the history of the automotive industry in Nigeria, keen observers of the sector are cold to the fact that up till now there is no single car either assembled or manufactured in the country for the masses or better still, for the low income people of the most populous black nation on earth, despite being more than thirty five years old of existence.

Though a major booster to economies around the world, the Auto Industry in Nigeria, is yet managing to cope with the present auto policy by the federal government, which is basically to lead the industry into the revolution of what was supposed to have been their initial priority, to make a Nigerian Vehicle that will be known to be so, all over the world.

The grumble is none other than to think that the make-up of this mega industry is either still over dependent on their foreign counterparts or yet unprepared to take the bull by the horn to devise possibilities out of the wood to create something innovative and different from all these usual and boring fabrications smuggled into the country.

A critical study of the Auto Industry in Nigeria since inception would only show the hands of private operators, whose empirical motif are principally for big profits,as business men of course and never in the actual sense of manufacturing. What they seem to do basically is to import vehicles, add little or nothing input; chunk them out to ostentatious buyers and then make plenty of money out them effortlessness.

Consider that the first assembly plant in Nigeria was established in the early 1960s, almost looking like just five years ago, all because there was practically nothing eventful done by the earlier initiators,to give Nigeria a model car or vehicle, whichever it is. The roll call of Assembly Plants in the country, however, started with the United Africa Company Limited set up to assemble Peugeot pickup vans; followed by the establishment of Federated Motors Industries and SCOA Motors for buses and Peugeot pickup productions respectively.

However, realizing the vital role, which the automotive industry could play in the economic development of the country, the Federal Government of Nigeria entered the industry in early 1970s with the establishment of two passenger car plants, Volkswagen of Nigeria and Peugeot Automobile Nigeria. On December 12, 1975 the agreement setting up four commercial vehicles plants was signed for the establishment of Mercedes-Benz with ANAMMCO at Enugu, Leyland Nigeria at Ibadan, National Trucks Manufacturers at Kano and Styr Nigeria at Bauchi.

In 1982 however, a said to be motivated agreement was made for the establishment of five minibuses plants for Mitsubishi, Nissan, Peugeot, Isuzu and Mazda vehicles; but they did not see the light of the day, mainly because the initiators again lacked momentum and the focus to execute their plan. It was considered by many analysts that if there had been strong will to achieve the course set out by the said plan, Nigeria would have at least made a major breakthrough long before now.

Take the growth in the Chinese economy for instance; it had come as a result many global automobile Original Equipment Manufacturers (OEM), which included Honda, Toyota, General Motors, Volkswagen and Ford,uniting to forma joint venture partnership with local car manufacturers in that country. Globalization has revolutionized business, and is forcing changes to everything from innovation to Product development and manufacturing, and is similarly forcing collaborative activities as well as networking, which is very significant.

That is why the Auto Industry in Nigeria should as a matter of must not only continue in their romance with the global auto manufacturing world, but more integrally bring the heads of all indigenous auto manufacturers and assembly plants in the country together, in order to come up with the first ever truly  Nigerian model car.

As a matter of fact, the bone of contention is that the Automobile Assembly Plants in Nigeria should have started positively long ago. And since that did not happen, the existing ones now should go steps further in pursuing the failed course in the Industry, because Nigeria is in dare need of a purely Nigerian fabricated vehicle that is unique from all existing models; and that is also immensely affordable by the low income people.

Hence, it is necessary to re-orientate the mentality of designers, fabricators and engineers in the auto industry; and to resensitize their focus. All of these departments require collaboration and mutual relationship, in order to secure a platform fora viable brain storming capable of yielding desired results.

Innoson Vehicle Manufacturing (IVM) Company Ltd, Nnewi, which was established in 2007 for example, is lauded as Africa’s leading vehicle producer and has turned out several vehicles since the past eight years. But suffice it to say that their applaudable innovations haven’t differed from any other vehicle produced elsewhere; all that is needful is that extra touch in the creativity that will give their cars uniqueness. Considering their collaboration with the Chinese automobile manufacturing business investors, Innoson is capable of bringing the desired innovation into the Nigeria Auto Industry, if its mainstay can nippily transform into a national focus, in its brands.

Nigeria, like many developing nations, has hoped that the import-substitution strategy would bring technological breakthrough in the automobile industry and brought in some sort of anticipation for the achievement of a hundred percent local content within 10 years after the commencement of operation of these plants. The Local content syndrome in today’s auto policy should by all means be a breakthrough motivator for all Assembly Plants in the country, to double efforts in the crave for a model Nigerian Vehicle.

The more surprising and ridiculous is why there hasn’t been the move for an all inclusive collaboration. That of course, may be that players in the Industry see themselves as rival competitors racing for the fittest, even without smartness of any sort; or else, at least one of them should have been doing something more creative and unique from others, even with less local content.

The more shame is the pride to keep trying to replicate what has already been done in the developed economies, which is another proof that there is lack of self initiative and momentum to devise and experiment among vehicle producers in Nigeria. It is not necessarily because the cost of new design and procedures are enormous. No, not at all, because if the mentality of these auto producing outfits was to gear towards finding unique designs, they will surely get more than enough to work with. The mentalities are not just right; talkless of the push and determination to do so.

However, collaboration will not only enable the local companies draw from the wealth of experience of their foreign counterparts, as their masters in the craft; but also from their local relationship, as well as get aid, in terms of equipment and machinery. It is a national pride to dream big for Nigeria and dreaming for such a uniquely fabricated model Nigerian car will really be great. So if seen as one of those national projects, the dream can become a reality.

…to be concluded next week