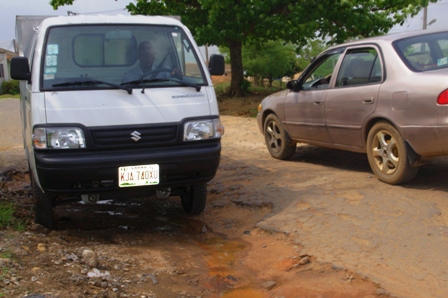 Boulos released its locally assembled mini truck to Motoring World’s editorial team for 48 hours. Along one of the roughest terrains in Nigeria, and indeed on the highway, Motoring World’s chief editor, FEMI OWOEYE, in company of the publication’s Lagos Bureau Chief, ROTIMI ASHER, made efforts to stress the locally assembled Suzuki Super carry. Their verdicts are revealing, answering a vital question: “How super is Suzuki Super carry?”

[dropcap]L[/dropcap]agos weather was nice and bright. Date was 5th April 2017. The Suzuki Super Carry, locally assembled and distributed by Boulos Enterprises Limited, was handed to us for independent motoring media test-drive and assessment.

Without hesitation, they bided us goodbye. We had it for two days. It was quite an experience. Having only 48 hours, we hit the road straight away, though not without first taking closer look at the truck’s styling and available equipment. Here we go….

Cargo compartment is bolted onto the chassis frame, which Boulos management confirmed, can be replaced with another option by simply unbolting it from the frame, take it off and bolt on a preferred option.

Standing on 155R 13 LT 8 PR tyres, the Super Carry comes with a ground clearance of 175mm and suspension made of Macpherson strut with coil spring.

Although at first glance, rather than spotting so much of stylishness, its entire body build quality rather looks rudimentary. But to our amazement, the truck drew attention. A couple of curious motorists and acquaintances approached us to ask questions. Given it a second look, its attention grabbing ability is attributable not only to its compactness, but also its pretty huge headlights, wrap-around bumper and huge windshield.

Interior space in the driver and single passenger compartment is not what you would describe as being hyper-roomy. However, for a vehicle of Super Carry’s size, its maker deserves kudos for space management. Headroom is generous for five-feet tall. Same goes for the legroom and shoulder room.

Driving position is high and upright, a feature that translates to excellent driving visibility.

Headlamp and indicator light control handle as well as screen washer and wiper control are just below the steering wheel, so accessible to the driver. 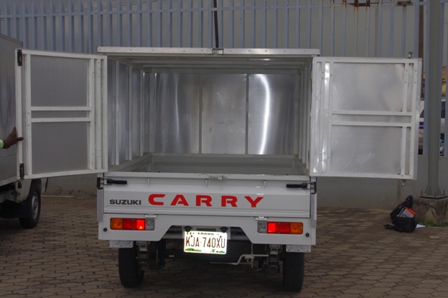 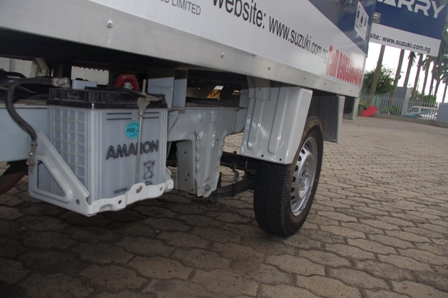 The cargo compartment is constructed with maximum through-loading flexibility. Secured with two doors, one can be opened, leaving the other secured. For easy loading, after opening the two twin doors, there is a bottom door that, when opened, all you have before you is a flat surface.

The tested LCV comes with no door bins, centre cubby or cup holders. Neither is it equipped with those confusing buttons of modern vehicles. Rather, in addition to easy-to-operate and pen-drive enabled central audio system, it comes with basic equipment needed by a vehicle’s driver. Super Carry’s best description is: “it does what it says on the tin.”

Day one: Upon leaving Boulos premises located along Acme Road, Ikeja, Lagos, from where we picked up the vehicle, we decided to head for Lagos-Ibadan Expressway.  Having in mind that a prospective owner might be a goods distributor, who might have to make delivery to customers located via rough terrains, we located one of the roughest topographies in the country. It is a town known as Ibafo, in Ogun State. We were ready for the worst. Our consolation is that Boulos GM Sales and Marketing, Mr. Evans, hinted that the company now has a version built and equipped for 24-hour mobile workshop(Thank God for that).

But the Super Carry, like an SUV, proves to be a tall truck with ability to wade through untarred interior roads with minimum or no hiccups.

It glided over street roads that are almost cut to half as well as potholes of a premier league football size and a few tank traps. Super Carry’s suspensions are able to soak the vibrations, with minimum noise sent into the body.

On our way back to Motoring World’s Lagos Newsroom, where the Super Carry was parked overnight, we confirmed its small turning circle ability. We turned around easily, where many vehicles would have to make forward-and-reverse cruise.

Although it did not rain during the two days, we tested the wiper with screen washer. They worked perfectly.

And when it comes to parking the truck, due to its compactness, it takes lesser parking space.

Attempt to confirm its maximum speed of 140km/hour failed. As soon as the speedometer dial climbed 80km/hour, warning alarm rented the air. About to touch 100km/hour, the engine power cut off and comes back on as soon as I lifted my feet off the gas pedal.

Reason: In accordance with the new safety regulations in Nigeria, the Light commercial vehicle is equipped with Speed limiting device.

But pushed through 90km/hour, brake was applied. No sponginess. The truck came to a halt within a stopping distance of about five-feet, which is impressive.

Driven on the highway, Super Carry’s steering feels sharp. But due to its high centre of gravity, we experienced a bit of body roll, when cornering at a speed of about 60km/h. This is not so much felt when driving at slower speed of say, 35km/hour. It goes round a corner sportily.

Albeit the version we tested is not equipped with an air-conditioner, all you need do to keep the passenger/driver compartment airy is open a sliding glass behind our heads. Air flows in naturally.

Another major issue on the highway was air hitting my head continuously. Thank goodness, I did not wear a hat, as it would have been floating on the  lagoon, trying to catch a boat. And when a bit heavy, it hits the vehicle, giving it a slight shoves. This, one must say, is only experienced, when not laden with cargo. When fully loaded, it cruises on smoothly, slicing through the air like a knife through butter.

We picked the Super Carry with a virtually empty tank. Filled up with about 20-litres of fuel, we covered 67kilometres first day and 40 kilometres the second day, making a total of 107 kilometres covered. From the volume of fuel indicated on its digital gauge at the end of our two days trip, Suzuki Super Carry is indeed frugal with fuel. I reckon that, using its fifth gear intelligently, the truck manages about 90 kilometres per gallon

A major minus for the Super Carry is in the area of safety. It comes with no airbag, engine immobilizer and central Locking. Although installing these will shoot up the price of the vehicle, this is an area that is worth looking at, adding it as optional features.

Being a purely commercial vehicle installed with seat-belts and speed limiter, the Super Carry is strong and sturdy. And when, laden with cargo of as much as 750 kg, it drives steadily with no issues. Its high ground clearance is a plus in a country dotted with rough and pothole-ridden roads and terrains. 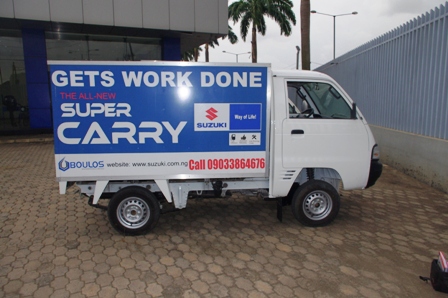 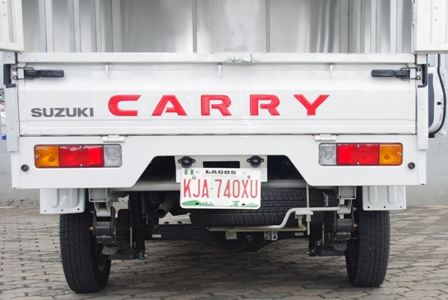 With reasonable care adopted by drivers of commercial vehicles of 1970s to 90, so long as its driver is safety conscious and avoids a crash, the Super carry is built to honestly do the job with less fuel. And with compulsory installation of speed limiter in Nigeria, occupants of Suzuki Super Carry still have prospect of surviving a crash so long as their seat belts are on.

Notwithstanding, to compliment the top quality of the Super Carry, we recommend that Boulos and Suzuki consider making airbags, immobilizer and central Locking optional features such that, whoever desires to pay a bit more for extra safety assurance could do so.

Nevertheless, from motoring media point of view, Suzuki Super Carry is fun to drive. It is sturdy and strong.

Most importantly, it is tropicalized and made for Nigerian roads. Se we recommend it for Nigerian businesses.

In the past two decades, the car market has declined twice: first due to the 2008 economic crisis, and then due...
Read more
Features

What inspires you to go to work every day? For Stephen Cooper, the Voice Recognition Features Lead – SYNC 3, inspiration...
Read more
Features