[dropcap]T[/dropcap]he all-new KIA Picanto, now in its third-generation, brings a new, more youthful and energetic character to the A-segment. 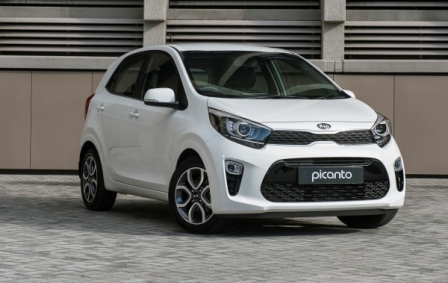 Boasting an assertive new design and a high-quality, high-tech new cabin, the latest model promises to be the most versatile car in its class, thanks to its low running costs and compact dimensions. While the new model is no larger than its predecessor, it’s ideal for city driving – yet offers more cabin and cargo space than ever before.

The all-new Picanto benefits from a global approach to car design and has seen KIA’s design centres in Namyang, Korea and Frankfurt, Germany, collaborating to design a car that is more youthful and energetic than ever before. Briefed to produce an innovative, bold and fun urban city car, designers have followed up on the mandate to full effect, giving the new Picanto a more assertive stance with bolder bodylines.

With the wheelbase extended to 2,400 mm (an increase of 15 mm), the wheels have been pushed further out to the corners for a 25 mm shorter front overhang, making the car look more planted on the road. Strong, straight lines run horizontally across the front of the car, emphasising the ‘tiger-nose’ grille and angular new wrap-around headlamps. Vertical lines that encompass the side intakes and lower grille enhance the Picanto’s more confident new ‘face’.

In profile, the new Picanto is characterized by distinctive lines running along the side skirts, shoulder and around the wheel arches, and subtly-sculpted body surfacing – again, each helping to create a more confident on-road design and visually ‘stretching’ the car for a greater sense of ride stability – although, at 3,595 mm in length, the Picanto is no longer than the outgoing model.

The new model adopts KIA’s wide C-pillar as a design motif, which stands more upright than that of the previous model, and combines with a longer rear overhang – up 10 mm, to 520 mm – to create a more assured posture.

The all-new Picanto offers buyers greater scope to express their personalities, with a choice of 11 vibrant paint finishes designed to make the car stand out. Among the six new colours available to buyers is ‘Lime Light’, ‘Shiny Red’, ‘Aurora Black’, ‘Pop Orange’, ‘Sparkling Silver’ and ‘Celestial Blue’ pearlescent metallic paint finishes. Depending on the model, the Picanto is fitted with either 13- or 14-inch steel wheels with stylish wheel covers, or a choice of 14- and 15-inch aluminium alloy wheel designs. High specification models of the all-new Picanto also feature new projection headlamps with LED indicators and LED daytime running lights.

Inside the new Picanto, KIA designers have created a more modern, refined cabin than the second-generation model, with new materials and layout adding a greater sense of quality for occupants. The predominantly horizontal, wide-looking design adds greater visual width to the interior, highlighting the increased cabin dimensions.

The dashboard layout is now more centrally aligned, with a large ‘floating’ HMI (human-machine interface) sitting at the heart of the centre console and moving many of the car’s controls further up into the driver’s line of sight. A satin chrome-effect strip runs across the dashboard for a higher quality ambience, and large, vertical air vents on both sides ‘bookend’ the front passenger compartment.

Black cloth-upholstered seats are available as standard, while high specification models are fitted as standard with two-tone black and grey leather upholstery. 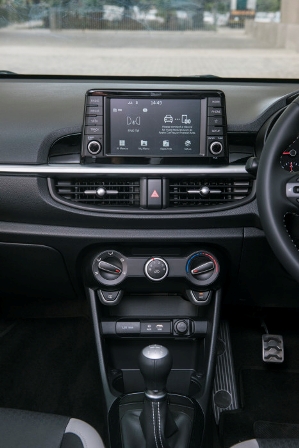 Inside, the new Picanto provides occupants with more leg- and headroom than best-selling rivals in the A-segment, while a lower step height makes for easier ingress and egress. The base of the dashboard has been moved upwards by 15 mm for greater knee and leg space for front passengers.

The new central armrest for front passengers (high specification models only) can slide back and forth up to 55 mm – a first in the class – and covers a small storage compartment designed to accommodate a sunglasses case. At the base of the centre console is an open double-shelf tray to store mobile devices and other small items, with new retractable twin cup holders, which can fold away to yield more storage space.

Beneath the sun visors in the front of the cabin, an optional new vanity mirror also features bright LED lights and a strip of mood lighting (high specification models only). By providing the surrounding glow of a make-up room mirror, the Picanto’s new vanity mirror makes it easier for occupants to apply make-up, check their hairstyle, or adjust their hat, scarf or tie.

The boot grows from 200 litres (VDA) to a maximum 255 litres – the most of any car in the class – and is available with a two-step boot floor, which can be raised or lowered by 145 mm to create additional space as required, as well as create an under-floor storage area. The rear seat bench can be folded down with a one-touch lever for maximum ease of use, boosting cargo capacity to 1,010 litres. 60:40 split rear-folding seat backs are a standard feature on all Picanto models.

Comfort levels are also improved. Where the seats in many A-segment rivals provide one-piece backrests with integrated headrests, the new Picanto gives buyers independent front seat headrests, which can be moved up and down. The Picanto’s new seats are also more comfortable for longer journeys, featuring the same seat-base materials and construction found in larger KIA models such as the Optima. In the rear, the angle of the backrest is more reclined – from 25 to 27 degrees – for a more relaxed posture, and slightly more prominent side bolsters on the rear bench further improve comfort and support during faster cornering.

New refinement measures adopted for the latest Picanto include a new soundproofing panel beneath the dashboard and in the floor of the cabin, while expandable sound-absorbent foam has been applied to lower sections of the A- and B-pillars. Beneath the bonnet reshaped air intake helps to isolate engine noise from the cabin. The structure of the engine mounts has also been revised to counteract engine vibrations. Furthermore, the windscreen wipers have been lowered by 6 mm to reduce the level of wind ‘roar’ generated at the base of the windscreen

Buyers of the new KIA Picanto will have access to some of the most advanced infotainment and convenience technologies available in the A-segment, while still enjoying the same high value for money expected of a KIA vehicle.

In lower specification models, the large, ‘floating’ HMI at the centre of the dashboard houses a 3,8-inch monochrome TFT LCD audio system, with clear buttons to control the system’s functions.

These systems offer not only a convenience benefit to users, but also a significant safety benefit in that it curbs the growing hazard of distracted driving. In both instances, only the most important Apps (such as telephony functions, messaging, music and maps) are available to use while the vehicle is in operation. As vehicles featuring Apple CarPlay™ and Android Auto™ is also equipped with Bluetooth incorporating Voice Recognition, drivers can use these Apps through voice control, meaning your hands never have to leave the steering wheel, and your eyes never leave the road.

Auxiliary and USB ports are located at the base of the centre console, ensuring drivers can play music directly from a smartphone or MP3 player, and keep mobile devices charged on the move.

The new Picanto is the safest A-segment car KIA has ever made, featuring double the proportion of Advanced High Strength Steel (AHSS) compared to the outgoing model and a selection of active safety technologies.

With a stronger body than ever before, 44% of the new Picanto’s bodyshell is cast in AHSS (up from 22%), while improving tensile strength by 12%. The new, stronger steel has been used to reinforce the floor pan, roof rails and engine bay, as well as the A- and B-pillars, strengthening the core structure of the car. The new bodyshell also uses more than eight times the quantity of structural adhesive found in the outgoing model (67 metres of joins throughout the structure are now reinforced with the adhesive). Overall, static torsional stiffness has been improved by 32%.

All models bar the entry-level models are equipped with an Anti-lock Braking System (ABS), as well as a driver and passenger airbag. All models are fitted as standard with ISOFIX child seat anchors.

1.0- and 1.25-litre naturally aspirated multi-point injection (MPI) petrol engines are carried over from the outgoing Picanto, but feature a range of enhancements to improve efficiency, driveability and overall responsiveness. Both engines are paired with a five-speed manual transmission delivering power to the front wheels. Some models are also available with an optional four-speed automatic transmission.

The 1.0-litre MPI engine is the most fuel-efficient engine available to Picanto buyers, and provides the entry point into the Picanto range. The three-cylinder engine produces 49 kW at 5 500 r/min and 96 Nm torque. Upgrades to the engine include a new exhaust manifold integrated into the cylinder head, and a new cooling system with shut-off valve, reducing the time it takes the engine to warm-up from a cold start. A new two-stage oil pump also reduces mechanical friction.

He stressed:“It’s a similar feeling to when we launched the previous generation model in 2011 – the excitement is palpable, driven largely by the car’s fantastic styling, it’s sheer quality and the high specification levels. We can not wait to introduce it to market!”

Euro NCAP, on Thursday, published its third round of safety results for 2022. The KIA EV6 and the Mercedes C-Class, both large family cars,...
Read more
Load more
2
SHARES
FacebookTwitterSubscribe