Why Land Borders Must Remain Shut Against Imported Used Vehicles

[dropcap]T[/dropcap]o a typical smuggler, who claims to be a stakeholder or car dealer, banning importation of cars through the land border means total ban. Anyway, that is the misinformation they like to spread so as to whip up sentiment. They tell ordinary man on the street that President Buhari has banned importation of used cars, leaving out second part of the information: “via the land border.”

After making their listeners to wrongly believe that government has suddenly placed an outright ban on importation of used vehicles, they add further comments such as: “It is obvious that this government does not favour the masses. He does not want masses to use cars. After all, brand new cars are not affordable to ordinary man and bla..bla..bla.. “

Voices of economic saboteurs, the foregoing are.

The federal government has not banned importation of used cars. From January 2017, anyone can import used vehicles via the sea port, sell or get them registered, provided necessary duties are paid.

What is wrong with that?

After all it is a fact that the nation’s land borders are among the most porous in the world. Given Nigerian huge landmass, to effectively control its land borders, expansion of the country’s boundary demarcation would be a basic requirement, which will run through hundreds of thousands of miles.

In addition, it will require concentration of the nation’s military might, because Nigerian Custom Service (NCS), like the nation’s judiciary, is cancerous with corruption. While conscientious and patriotic custom officers get killed by desperate gun carrying smugglers.

It has been that bad over the years. Many who are custom officers today joined, because of hope of getting rich via tips and bribery from smugglers. 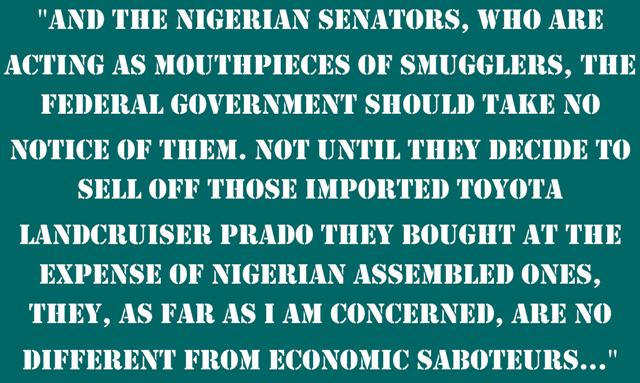 Worst, aside death trap vehicles smuggled into Nigeria, government loses billions of Naira, to economic saboteurs, who do not pay duties on vehicles they smuggle into the country via the porous land borders. They sometimes kill custom officers, who try to stop them.

They drive dangerously in groups through border towns, endangering lives of women, children and vulnerable people.

Since duties are not paid on those vehicles, smugglers can afford to sell their imported vehicles cheaper than ones genuinely imported into the country.

And guess who bear the brunt? Nigerian youths employed by genuine used and brand new car dealers are.

Major losers are the nation’s toddling assembly plants, which have virtually stopped production, because they cannot sell. They have had to throw back into the unemployment market over 2000 Nigerians.

No responsible government will watch and allow this to continue.

So the present regime did the right thing by following recommendation of genuine stakeholders of the nation’s auto industry by placing a ban on used vehicles imported through land borders.

By the way, what are economic saboteurs crying wolf over? Genuine car importers and dealers, can still import used cars and clear them through the sea port. Duties via land and sea borders are no different. The only difference is that, from January, it will become difficult to cut corners and short-change Federal Republic of Nigeria.

That is right. The nation cannot afford to build new land borders and divert the attention of its military away from war against terror they are fighting.

Notwithstanding, as soon as the new order takes effect come January, the Federal government needs to commence total overhaul of the Nigerian custom service. Compulsory use of custom agents should be removed. And I mean they should be removed or let their job be redefined. Let engaging the service of clearing agents become voluntary. For lots of the agents are simply agents of corruption. Nigerian sea ports are where one license issued to a Clearing agent is used by more than 10 unlicensed agents. They, on behalf of fraudulent custom officers, rip off importers. Some even parade themselves as license agents, with another person’s license without the knowledge of the owner of the license. That is a story for another day.

And the Nigerian senators, who are acting as mouthpieces of smugglers, the federal government should take no notice of them. Not until they decide to sell off those imported Toyota Landcruiser Prado they bought at the expense of Nigerian assembled ones, they, as far as I am concerned, are no different from economic saboteurs.

I mean they are no better than pirates of Nigerian auto industry. And so their comment over this matter holds no water.

By the way, what happened to the senators’ previous official cars? I mean, what did you do with those cars?  Were they given out as Christmas presents or what?

As they read this piece, I am assuring them that this question will continue to be a dagger of Damocles hanging upon their heads until justice is done.

Maserati writes a new chapter in its history by expanding its Trofeo collection. Following the 2018 launch of Levante Trofeo, the...
Read more
Load more
112
SHARES
FacebookTwitterSubscribe