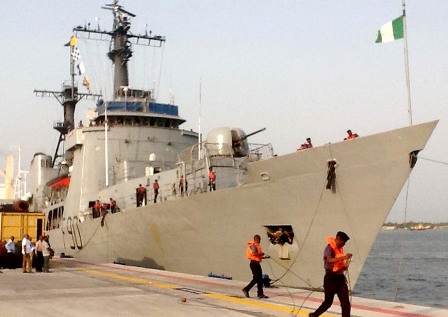 The Nigerian Navy has intercepted 1.1 million litres of diesel allegedly stolen from pipelines belonging to multinational oil companies in Rivers.

No fewer than 13 suspects, all male of Nigerian nationality, were arrested on account of their alleged role in illegal shipment of the petroleum product to undisclosed locations in the state.

Capt. Victor Choji, the Executive Officer of the Nigerian Navy Ship Pathfinder (NNS), Port Harcourt, made this known on Sunday while handing over the 13 suspects to operatives of the Economic and Finanial Crimes Commission (EFCC).

He said that a vessel, tug boat, barge and five large wooden boats, were seized at two different locations during the operation.

“In line with strategic directives to rid Rivers state of oil theft and illegal bunkering; troops of NNS Pathfinder under Operation Delta Safe made some arrests and seizures at different locations.

“On May 6, troops intercepted and seized a vessel, MT Preye I and five very large wooden boats with about 409,399 litres of suspected refined diesel at Eagle Island.

“Eleven crew members on board the MT Preye I were subsequently arrested and they have been in our custody undergoing investigation,” he said.

Choji said the 11 suspects were caught in the act of loading the petroleum product from five wooden boats in the late hours of the night.

“Similarly, on June 19, troops also impounded a tug boat, PK II, and a barge, Naomi 03, laden with about 700,000 litres of petroleum product suspected to be illegally refined diesel.

“No fewer than two suspects were arrested over their involvement in the illegal shipment of the petroleum product,” he said.

Choji said that the seizures and arrests was part of intensified-mop up operation ordered by naval authorities to stamp out oil theft and illegal refineries from the Niger Delta.

He said that a large number of naval operatives had been deployed in line with a harmonised standard operating procedure aimed to enforce law and order in the maritime environment.

“The Nigerian Navy will not rest in its bid to frustrate all forms of illegalities in waterways in Rivers and Niger Delta at large,” he assured.

He said that the suspects had made useful statements on the source of the products, adding that EFCC had taken over the matter for further action.

A senior operative of EFCC, Mr Micheal Adukwu, who received the the exhibits and the suspects took delivery of the suspects, aplaud the synergy between the two security outfits.

He assured that the matter would be investigated thoroughly and the suspects prosecuted.

The News Agency of Nigeria (NAN) gathered that the current effort to clamp down on illegal refineries was not unconnected with the Federal Government move to establish modular refineries in the Niger Delta. (NAN)

Euro NCAP, on Thursday, published its third round of safety results for 2022. The KIA EV6 and the Mercedes C-Class, both large family cars,...
Read more
Load more
5
SHARES
FacebookTwitterSubscribe