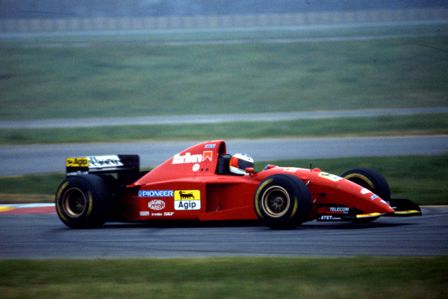 [dropcap]N[/dropcap]ow under the consignment of Girardo & CoRétromobile in Paris,  the 1995 Ferrari 412 T2, Chassis 157, is available for sale with the industry leaders from today and can be viewed in Paris throughout Rétromobile, after which the car will be on display in the firm’s London showroom.

412 T2 Chassis 157 is the first Scuderia Ferrari Formula One car driven by the newly hired Michael Schumacher, before which the car was used by Scuderia Ferrari in the 1995 Formula 1 World Championship. During this time, it was campaigned by Jean Alesi in Brazil and San Marino where the car placed 5th and 2nd. It was after this period of competition, however, that Chassis 157 would become arguably one of the most important Ferrari F1 cars of all time.

Ferrari had entered the 1995 Formula 1 season with the carbon-fibre 412 T2, powered by the all-new and final V12 Ferrari F1 engine, the 3.0-litre, Tipo 044. The V12 engine was positioned further forward thanks to a smaller 140-litre fuel cell under new regulations and mounted to a transverse six-speed semi-automatic Ferrari gearbox.

In 1995, Schumacher was released from his Benetton obligations and quickly arrived at Ferrari’s home in Maranello for a test in 412 T2 Chassis 157 at the team’s private test track, Fiorano on November 16th. Wearing a white race suit and his iconic helmet, Schumacher had his first taste of the car in damp and cold conditions. Ferrari testing sheets, which accompany this Ferrari Classiche Certified 412 T2, confirm that Chassis 157 was driven by Michael Schumacher over seventeen laps at Fiorano.

This test was huge news for both Italy, and Formula One, with more than 2,000 people flocking to watch the 26-year old German drive a Ferrari Formula One car for the first time. Five days later, Scuderia Ferrari and Michael Schumacher travelled to Estoril in Portugal to test Chassis 157 once again. On the 21st November, Schumacher covered twenty-eight laps of the Portuguese circuit, and set a best lap time of 1m 21.20, an impressive 0.7s faster than the best Ferrari (Gerhard Berger) had managed in qualifying for September’s Portuguese Grand Prix. As with the test at Fiorano, these laps are documented with copies of the original Ferrari test sheets accompanying Chassis 157.

After its life in the spotlight, the Ferrari 412 T2 was bought by German collector who acquired the car directly through Jean Todt, Scuderia Ferrari Team Manager. Under its current ownership, this ex-Schumacher Scuderia Ferrari 412 T2 had its engine overhauled in 2014 and has covered less than 100 kilometres since. In 2018, the car returned to Maranello where it was tested at Fiorano prior to Ferrari stripping and rebuilding it. The works included a full chassis service and repainting in the fabulous

Rosso Scuderia colour, along with a brake system overhaul and gearbox service. In February 2019, with Ferrari having completed the rebuild, this 412 T2 was inspected and Certified by Ferrari Classiche, confirming it to retain its original chassis, engine and gearbox.

Girardo & Co. founder Max Girardo commented: “It goes without saying that it is an honour to be handling the sale of this exceptional and significant F1 car, and to not only have the chance to spend time with such a machine but also find it a new owner is true joy.”

Girardo & Co. will not publicly announce the car’s asking price, and any values attached to it by other parties are not official.

Last weekend’s season-opening Australian Grand Prix in Melbourne was cancelled, following McLaren’s withdrawal from the race on Thursday, after one of...
Read more
Motor Sports