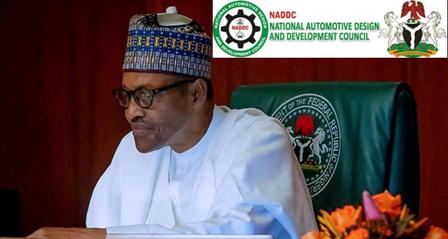 …Identifies Constraints Working Against the Sector

Manufacturers Association of Nigeria (MAN) has advised President Muhammadu Buhari’s administration to take advantage of the huge potential of the auto industry to build the nation’s economy.

It made this submission in its response to the recent federal government’s call for a new blueprint for the Nigerian manufacturing industry.

In its submission, forwarded to Motoring World, MAN described the nation’s auto industry as a sector with great potential for reviving the nation’s manufacturing sector.

It argued: “The fact that Nigeria annually imports a high volume of vehicles especially used ones, for sale, is a proof that local demand for automobiles vehicle is high enough to sustain the nation’s auto industry stakeholders, especially the registered auto assemblers, as well as accommodate more investment.”

“This sector,” it explained, “which is made up of eight sub-sectors, has witnessed major decline since the mid-1980s. At that point, the country had a number of functional assembly plants. In 2010, capacity utilization was about 10 percent and surviving players in the industry were PAN, ANAMCO, Styer, Leyland, National Truck Manufacturing Ltd, Autobahn, GMNL, Innoson, and a few others in the two-wheel sub-sector.

“The sector, has very high potential for employment generation and product linkages involving automotive component manufacturers as well as development of Small and Medium Scale Enterprises.”

However, according to MAN, Nigeria’s auto sector has been hindered from fulfilling its potential, due to major constraints, which include: Low local patronage arising from non-implementation of government policy on patronage of made-in-Nigeria products, inconsistent policy, especially as regards the lifting of ban on importation and the subsequent lowering of import duties, which resulted to influx of both new and used automobiles; most of which are not environment friendly.

MAN also blamed absence of basic engineering industries, including flat sheet to supply the component needs of the sector; lack of encouragement of the local component manufacturers through the Auto policy, side-lining of the Sectoral group at the drafting of the National Auto Policy prepared by the Federal Government; indiscriminate granting of Bona-fide Manufacturer status to traders, which it believes is fast constituting threat to the Automotive Industry structure in Nigeria.

MAN laments: “Because the Nigerian market has been flooded with used cars being imported into the country at low tariff, the locally made vehicles are more expensive, due to low sales volume, which is made worse insufficient Motor Vehicle Credit Finance Scheme to drive the investment in the auto industry.

The Niger State government has signed N10 billion Memorandum of Understanding (MoU) with Manzuwa Nigeria Ltd. for the construction of 40...
Read more