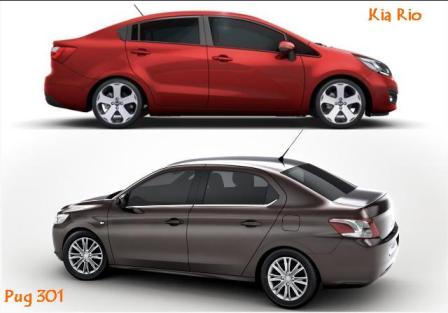 Kia Rio and Peugeot 301 are two sub-compact sedans currently assembled in Nigeria. But why should an auto buyer pick one instead of the other. Motoring World’s Editor-in-Chief, FEMI OWOEYE, reviews both cars and provides a guide to prospective buyers…

[dropcap]I[/dropcap]t is like comparing a Lion and a Tiger. Both assembled locally by Nigerians, Peugeot 301 and Kia Rio Sedans are two of many fruits of the nation’s auto policy. Since the current auto policy was put in place, the nation has been inundated with locally assembled vehicles from different brands.

Nigerian automotive buyers are spoilt for choices. Kia Rio and Peugeot 301 belong to the sub-compact automotive class. Rio and 301 powered by 1.2 litre engines are supposed to be most affordable, machines that fleet operators would acquire as pool cars for staff. They are good for first time car buyers, just like the Volkswagen Beetle of old.

That’s why, at Motoring World, we chose to begin this important exercise with the Rio and 301.

Kia Rio came out for the first time in 2011, whereas Peugeot 301 was not born until 2012. Both cars, Kia Rio Sedan 1.2 and Peugeot 301 1.2, are assembled from two extreme ends of the country. Peugeot 301 is rolled out of the Peugeot plant in Kaduna. While Kia Rio is put together at the Nigeria’s virtually new Kia plant based on Apapa-Oshodi Expressway, Lagos.

While differences between the two cars might not be that wide apart, to be able to make an informed purchase decision, a prospective buyer must get his or her priority right. What do you want in a compact sedan? Is it beauty, economy, performance equipment or combination of two or more? Let’s have a look.

Those who desire beautiful styling might have a bit of difficulty making a choice, because both machines are elegantly sculpted. 301 is so elegantly styled that you could see sexy lines running along its hood. And looking at generation III KIA Rio, what you see is a sleekly styled automobile character. However, standing few metres away, when parked side by side, you are likely going to see a 301 with posture of a lion and a Rio with a character of a Tiger. But hold your breath.

Upon inspecting the interior of both cars, I saw a wall of difference. 301’s interior suffers from too hard plastics. If what appeals to you is a posh interior design, you would go for the Rio, which looks more modern. It is actually targeted at the young generation, who would not be bothered about space and comfort.

However, sitting in both, 301 is more comfortable and spacious.  It has got more headroom, legroom and shoulder room.

What accounts for 301’s extra space are its dimensions.  Peugeot 301 is 72mm longer than Kia Rio, wider than Rio by 48mm and higher by 4mm.  301’s wheelbase is wider than Rio’s by 82mm.  Foregoing dimensions translate slightly to more room for the 301. 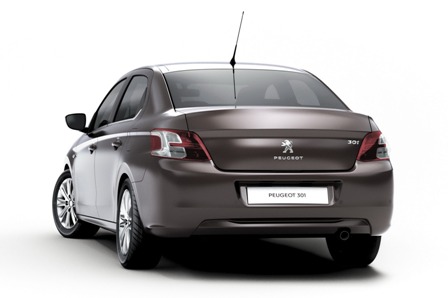 Both cars have generous trunk spaces, no doubt. But again, 301’s trunk capacity is 506 litres, while that of Rio is 6-litres less at 500 litres. Same applies to the two cars’ fuel tank capacity. Rio and 301 come with 43-litres and 50-litres of fuel tank capacity respectively.

Peugeot 301 is powered by 3 cylinders/4-valves, 1.2 litre VTi 72hp engine, with a torque of 110 Nm/3000rpm (Revolution per Minute). VTi Engine means Variable Valve Lift and Timing injection, being feature of an engine created jointly by both PSA Peugeot Citroën and the BMW Group from the BMW VALVETRONIC concept. Peugeot claims to have come up this type of engine purposely to reduce fuel consumption by as much as 10%. And just as the number implies, it has the pulling power of 72 horses combined.

Kia Rio, on the other hand, is powered with 4-cylinder, 1.2 litre engine with 16-valve, 85-horse power, 119.7Nm (Newton Meters, which is standard unit of torque)/4000rpm. And the Rio engine is as powerful as 85 horses combined, giving it more pulling power compared with 301.

However, Peugeot 301 comes with 50-litre fuel tank as against Rio’s 43-litres fuel tank. That means, driving a 301, a full tank will take you farther before you would need to refuel, which is a vital factor in a nation, where fuel workers unions are fond of threatening availability of fuel at filling stations.

Riding in 301 is suppler and the noise level is lower, as everything in 301’s interior is literally screwed on, rather than being glued on or clipped on in the case of many modern cars.

The Rio offers a comfortable ride too, but 301 has an upper hand, offering more comfortable ride. Of course both 301 and Rio do not bounce or overreact, as one experience in typical small cars. But the sporty Rio SX trim brings a slightly stiffer ride, largely because of its lower-profile tires.

Driving a generation III Rio 1.2 Sedan in a city like Lagos, where you could get held up in a crawling traffic, a 6.3-litre of fuel will take you through 100 kilometres, as against 301, which will suck up to 7 litres to cruise through similar distance.  On the contrary, economy table turns, when the holdup becomes heavier. In that case, 301’s VTi engine gets to work, reducing to 4.3 litres the amount of fuel the car requires to cover 100 km, as against 4.4-litres, which the new generation Rio will use to cover the same distance. On the average, however, Kia Rio wins, burning mere 5.1 litres of fuel to cover 100 km as against 301, which uses 5.3 litres to cover the same distance.

When the Rio was taken through crash test, pre-2009, it earned 4 stars, which was not too bad. But post 2011 Euroncap crash test awarded the Rio full 5 stars, with 92% on adult safety, 84% on child safety, 46% on pedestrian safety and 86% on Safety Assistance such as ABS, Airbags, among others.

Whereas, when crash-tested, Euroncap awarded the 301 only 3 stars, with 71% on adult occupant safety, 75% for child occupant safety, 54% for pedestrian safety and 33% for safety assist equipments.

Both Peugeot 301 and Kia Rio are equipped with ABS (Anti-lock Braking System), which helps to apply correct amount of brake pressure to each wheel to help drivers maintain absolute control, when breaking suddenly.

But then, compared with the Rio, 301’s interior exhibits more hard plastics, which is thumb-down.

As displayed on PAN Automobile Nigeria’s website, 301 sells from N3, 280, 000. Whereas, Dana Motors’ Marketing, Mr. Jimoh Olawale confirmed to Motoring World International that  Kia RIO, which used to sell below N2milion before dollar scarcity, now goes for N3, 600,000, a difference of N320,000.

Both cars are made in Nigeria by Nigerians for the Nigerian roads. They are both effectively tropicalized. However, choices depend on what your priorities are. For an auto buyer, who is more interested in supple ride, comfort and space as well as fuel economy, when held up in crawling traffic, 301 is the answer. For it has got better suspension and more room for passengers and luggage.

But when it comes to styling, safety, equipment, engine performance and fuel economy on the highway, Kia Rio carries the day, although there is still a need to take into account the fact that a full 301 tank means longer distance travel before there would be need for refuelling.

And if the price on Peugeot’s website is anything to go by, coupled with the Rio price figures available to us as at press time, Peugeot 301 is more affordable and so wins on affordability scale.

Note: This report is not applicable to Kia Rio 1.4 litre and Peugeot 301 1.6-litre, which are of far higher specs.