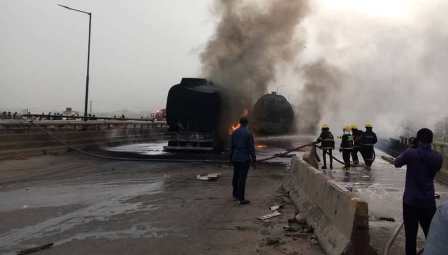 Federal Road Safety Corps (FRSC) recovered a burnt dead, human body at the scene of an explosion, involving three tankers and a truck along Lagos-Ibadan Expressway.

Providing update at the scene of the incidence, which occurred on Sunday, Mr Olusegun Ogungbemide, FRSC  Lagos State Sector Commander,  said, while the recovered dead body had burnt beyond recognition,  two injured persons were rescued and moved to the hospital.

“The accident,” he explained, “involved three tankers and one truck. Two of the tankers carrying petrol, another carrying gas and an articulated truck,” he said.

On the possible cause of the accident, Ogungbemide, who noted that investigation was still ongoing, said that observations revealed that one of the tankers lost control and rammed into others, which resulted in the explosion.

“It was a loss of control. One of the tankers that rammed into other vehicles either had break failure or got distracted. Investigation is still on, we can’t just be accurate now,” he said.

FRSC earlier announced diversion of traffic on Lagos-Ibadan Expressway, following the explosion to avert a chaotic traffic situation on the busiest highway.

By: FEMI OWOEYE The manufacturing Association of Nigeria (MAN) has described the neglected Automobile Industry as the only...
Read more
Nigeria

The Governing Council of the Nigerian Content Development and Monitoring Board (NCDMB) has approved the establishment of 50 million dollars Nigerian...
Read more
Nigeria