How Henry Ford Put The World On Wheels 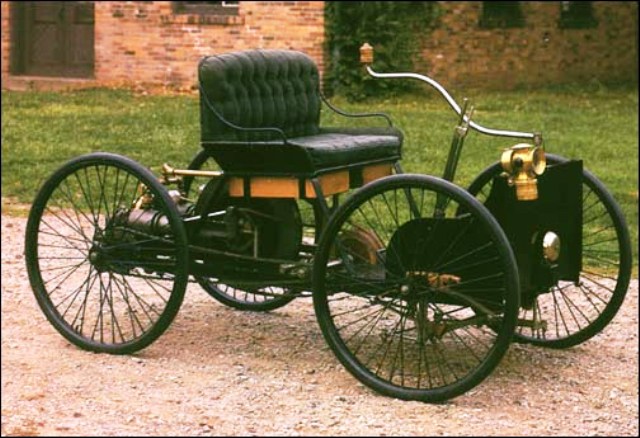 [dropcap]F[/dropcap]rom early this year(2015), Ford has been in the news. At a point, his great grand son got his great, great grand car, Mustang unveiled from the world’s tallest building in Dubai. Recently again, Ford’s family bought back one of the earliest commercially manufactured cars. But none of these stories is as inspiring as how the late Henry Ford made his very first car. Car? Did he call it a car? Or would modern mere vehicle assemblers refer to it as a car? Well, they called it Quadricycle.

Quad or no quad, the making of that machine remains an inspiration to every creative mind in the world. First like thousands of motor mechanics across Nigeria, the late Ford, then a very young man, had workshop behind his home on 58, Bagley Avenue, Detroit. Michigan, United States. The workshop was tiny. But it means a huge lot to him. Between the age of 20 and 30, the young Ford’s ambition soared like an eagle. Indeed, it eyed beyond the eagle sky. He would think. And think. And think. Like the Biblical Joseph, he dreamt. But unlike Joseph, he told no one. So no dumping in a well or selling into slavery. He remained free. So was his mind.

A Watch That Inspired It All

He was not rich. He was not born with silver spoon in his mouth. When Ford was 13 years old, he received a gift of a pocket watch from his father. A gift that set Ford’s mind spinning like the mother earth. A gift that opened his inner eyes into the deeper world of engineering ingenuity. Instead of keeping this watch and show it off to his friends, he looked it all over, wasn’t interested in its aesthetic. He wanted an answer to certain questions: ‘How does it work? How did they make it to work? How?’  He wanted to know. He went inside his room, took the watch apart and assembled it back. That was it! Done! Instead of showing off a gift of watch from his father, what he started showing was his own inborn engineering gift. Success from his watch experiment further fired his engineering ambition. His skill became known. He started fixing watches for friends and neighbours.

Though born in a farm, the root of Ford’s ambition was too deep for hoes and cutlass to dig out. So at the age of 16, he left home to become an engineering apprentice at Michigan. In less than two years, the naturally talented  Ford had acquired enough skill to be able to operate and service steam engines. Not long, he was hired as an engineer for the Edison Illuminating Company. By 1893, he was promoted to position of a chief engineer, a feet incapable of changing his ambitious pursuit of making a car. After closing from his paid job, Ford would get  into his little workshop and do more thinking and experiment. In less than three years,  Ford’s thoughts

metamorphosed to something physical. He concluded a plan to make a car that would not be drawn by horses. By 1896, the age-long dream became a reality. At the age of 32, Henry constructed his first car, which he named the “Quadricycle,”, because it ran on four bicycle tires. Ford’s Quadricycle was built on a steel frame with no body. The dash was made of wood, and the seat looked like a  toolbox covered in green cloth with metal arms. In place of a horn, he had an electric bell in

That was it. He made it. But to the then young Ford, it was the beginning. He remained focused so that there would be a Ford Focus. As a matter of principle, taking his achievement to another level was a must so that Mustang could be born. He hardly rested, Tuesday to Monday, so that one day a Mondeo would roll out of his factory. Rather than wining and dining during Easter, he thought of making a Fiesta and explored more ideas so that the world could have Ford Explorer. He went and conquered the world automotive market.

Born on July 30, 1863, on his family’s farm in Wayne County, near Dearborn, Michigan, the founder of one of the world’s biggest automakers, Henry Ford was married to Clara Ala Bryant. They both had children. Ford’s great grand son, William Clay Ford Jr. remains today executive chairman of Fords Motor Company.

Oil prices sank around 3% on Thursday as OPEC+ confirmed it would only increase output in August as much as previously...
Read more
Load more
25
SHARES
FacebookTwitterSubscribe