Home Features Hello: How can Vehicle SYNC Understands my Voice Commands from Anywhere in...
Features 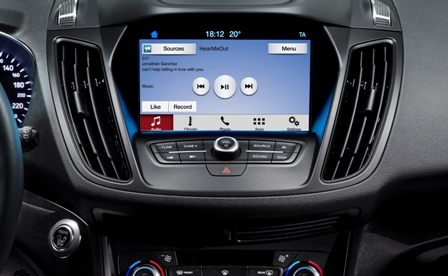 What inspires you to go to work every day? For Stephen Cooper, the Voice Recognition Features Lead – SYNC 3, inspiration comes from knowing his friends and family are safe from the perils of distracted driving partly in thanks to his contributions to the SYNC system.

After multiple firsthand experiences on the consequences of distracted driving, Cooper was driven to streamline SYNC’s voice command system by reducing multiple inputs to just a single voice activated request.

“The number of accidents I have seen that have been caused by someone being distracted while driving was one of the drivers that made me go into voice recognition,” says Cooper. “Reducing distractions as much as possible and making things easier to operate will hopefully keep drivers safe.”

Cooper is part of Ford’s Core Speech Technology team based in Dearborn, Michigan responsible for SYNC®3’s voice recognition features. One of his team’s main goals has been to develop a simple and streamlined voice command experience for customers.

Voice commands have been a part of SYNC® since the very first versions of the system were launched 13 years ago. SYNC®3 was announced in 2014, and has grown and evolved to support 25 languages, allowing more and more people globally to enjoy its features.

How does SYNC® know what I’m saying?

Available across various model ranges of Ford, SYNC® has evolved to become one of the most intuitive and innovative voice-activated systems available.

At the core of SYNC®’s voice-activated systemis a speech engine which acts like the speech recognition brain. A language model and decoder software within the speech engine breaks down, analyses and understands each spoken command.

The language model is a vast list of words or commands which is paired with a specific task. For example, the command, “Call John Doe” will be listed in over 25 languages which the SYNC® system caters to. The large catalogue of commands corresponding to the voice-activated features within SYNC® are all listed in the language model.

The Core Speech Technology team is led by Yvonne Gloria who has been involved with SYNC® innovation since SYNC 3 was announced in 2014.

Gloria, a software engineer by trade, attributes success in SYNC®’s voice commands to its simple usability. “Not all users of our software are engineers,” she said. “Just because I developed the software to a specific task, the customer shouldn’t be forced to see it that way. This led me to studying how people use computers and learn software, which made me think more like a customer rather than an engineer.”

Constant evolution has helped Core Speech Technology’s engineers refine and expand SYNC®’s functionality. By analyzing the ways customers use SYNC®, engineers are able to make the system more intuitive either by streamlining tasks or by making them easier to access. Through constant refinement, the team has been able to make more than 80 per cent of SYNC’s voice commands a single step process.

With over-the-air diagnostics and analytics on SYNC® 3, engineers can get a steady flow of voice recorded data showing how customers walk through SYNC® for different tasks. Engineers detect common errors that users encounter and help streamline tasks, rather than just leaving users to figure it out for themselves. Data is collected with the permission of users.

“It’s a never-ending activity once the program starts, until it goes to the end of its life cycle, because you’re constantly taking market feedback to create updates further down the road,” said Cooper.

The Future of Voice Commands

There is still a lot of potential for SYNC®-equipped vehicles to enhance your driving experience, Gloria explained. “As technology moves forward and gets better, and as buttons are eliminated in place of bigger and more prevalent screens in the vehicle, voice command technology has a big part to play in the future.”