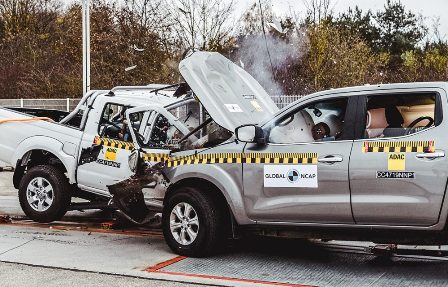 Recently, Global NCAP, programme of a UK-based charity organisation, conducted an unusual crash test. It selected a 2015 used vehicle made for Europe, which it crashed against a 2019 model of the same vehicle but made in and for sub-Sahara Africa, including Nigeria.

With the test result, Global NCAP arrived at a sneaky submission that African auto buyers are better off with imported used vehicles from Europe or America, because, according to them, vehicles assembled or manufactured in Africa for Africans are unsafe.

The NCAP result sounds beautiful, being white-washed with seemingly concern for lives of Africans, displaying a red flag of double standard. But digging deeper into the real motive of the so-called crash test report, especially for a country like Nigeria, with a fledgling auto industry being suffocated by imported used automotive craps from Europe and America, the unusual crash test is meant to send a dangerous message to Africans to continue to endanger their lives buying junk, accident and rejected used vehicles from Europe and America, most of which come with defective safety equipments, even airbags.

Truth is: Contrary to Global NCAP reports, more Nigerians have over the years died of road crash involving imported used vehicles, popularly known as Tokunbo, as most of the used vehicles come with weak chassis and defective safety equipments.

In the process, an accident victim, who would have survived ordinarily, even in a vehicle without airbags, would bleed to death.

Why the test is premeditated

Global NCAP tested only one model from one brand from one continent (Asia).

After the single test on just the single make of single brand, Global NCAP made a sweeping submission, which in a roundabout way encourages Africans, including Nigerian auto buyers to opt for imported used vehicles and avoid locally made brand new ones.

“A new car in Africa is not necessarily a safer car. Second-hand imported cars from regions with tougher regulatory requirements for safety and environmental performance can offer consumer much greater protection…”

With the foregoing statement coming after the intended crash test, if this is not a trade war, World NCAP owes African nations further explanations.

In simple term, what David Ward concluded is that all vehicles made or assembled in African countries are unsafe, adding that auto buyers in African sub-region are better off buying killer junk from Europe and America, which he referred to  in his statement as “regions with tougher regulatory requirements for safety and environmental performance car…”

Electric Vehicles’ Connection: Ward’s message is even more potent now that change from internal combustion engine-powered to Electric vehicles (EVs) is ravaging Europe and America. According to recent report, over 30% of new vehicles sold in Europe in 2019 happened to be EVs.

And, significantly, Stallion Group has concluded plans to, in conjunction with Hyundai and later Porsche, launch the first ever passenger EVs into the Nigerian market and also embark on EV manufacturing in the country, just as the Federal government of Nigeria is putting finishing touches towards imprinting in the nation’s status book its long overdue NAIDB (Nigerian Automotive Industry Development Bill).

Given the foregoing conflicting developments, Europe and America have a cause to worry, because full implementation of the bill would translate in discouraging importation of used vehicles into the country.  It is a known fact that Africa, most especially Nigeria, has always been unhindered dumping ground for imported used vehicles from Europe and America, a sad development, which has almost snuffed the life out of the nation’s auto industry.

The likes of Global NCAP are not unaware that once the National Automotive Industry Development Bill (NAIDB) goes through its final amendment and receives presidential ascent, the issue of importation of junk as well as the ghost auto industry, where European scraps are illegally knitted together for sale to uninformed auto buyers in the country shall be dealt with.

Therefore, what the Global NCAP’s premeditated crash test is out to achieve is to prepare the minds of Africans to avoid locally made vehicles, because they are “not as safe as imported used vehicles”, which is fallacious.

Thinking ahead, a sneaky way of preparing marketing ground for rejected used vehicles from Europe and America was to arrange a ridiculous crash-test of a European used pick-up vehicle against a brand new one made in Africa for Africans, followed with a scary message targeted at African auto buyers with an ultimate motive of discouraging development of auto industries in countries like Nigeria and possibly kill already fully established ones in nations like South Africa.

Global NCAP’s recent car to car crash test raises an important question: With what criteria did it select only Nissan, a brand of Asian origin for the test?

After all, many Euro-American brands such as Ford, Mercedes-Benz, Renault, Peugeot, Porsche, Volkswagen, BMW, Jaguar Landrover have auto manufacturing/assembly plants in Africa. Selecting a European brand for this crisscross job could potentially affect European auto industry. A high profile brand from Japan would be more appropriate for use as a scapegoat, not to achieve a scientifically tenable result, but to send out an intended Trade War message: “Our junks are safer for you. It is dangerous buying what is made in your country.”

How many vehicles of how many segments from how many brands were cross-crash-tested before Global NCAP’s President came up with his sweeping and generalised advice to Africans? Just one.

Come to think of it, to make room for affordability, popular practice among auto makers worldwide is that, when rolling out a new model, there are standard and optional safety equipment.

In a simple term, therefore, Global NCAP crash test report on old and new Nissan NP300 was ill-motivated, ill-timed, aimed at creating a legitimate market for European and American used vehicles as well as stifling local auto manufacturing, which is unacceptable.

Auto buyers in Nigeria and other African nations should disregard the report, as it is nothing less than a sneaky trade war.