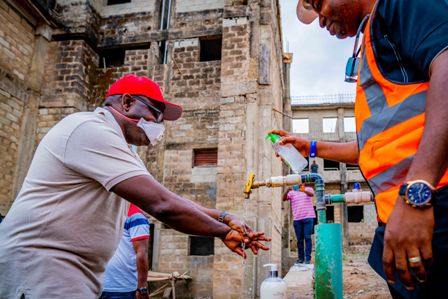 The Ekiti State Government has been commended for responding swiftly to the plight of students traveling outside the State following the closure of schools ordered by the state government as part of measures to curb the spread of Coronavirus.

Governor fayemi had earlier on Sunday directed that transportation assistance be provided for students of higher institutions in the state travelling out of the state following the closure of their schools. He also directed that the students be provided with hand sanitizers in the course of the journey.

The first batch of the students were ferried to their respective destinations on Monday, while the second batch were conveyed on Tuesday.

Reacting to the development, the President of the Students’ Union Government of Ekiti State University, Mr Gbadero Oluwaseyi, described the gesture as timely, adding that it would mitigate the challenges faced by students who were traveling home in their hundreds.

The EKSU SUG President, who described the gesture as sudden and unexpected to many students, said the initiative was an intuitive response of the Governor who came to their rescue at a time it was least expected.

He lamented that some transport providers were taking undue advantage of the huge number of students traveling home to enrich their pockets by increasing transport fares.

Also, a student from the Federal University, Oye Ekiti, (FUOYE), Miss  Victoria Jegede applauded the state government for coming to their aid. She said, “The government had thought it well to make provision for buses that would convey students free from the State Capital to their various destination”.

Miss Jegede who is also a beneficiary of the scheme said it was a surprise that the price of transport fare from Ado to Lagos was suddenly increased to #4,000 making it difficult for her and some of her fellow students to leave immediately the directive was given.

Speaking to pressmen at Fajuyi pavilion in Ado Ekiti, the State Capital where the students were being dispatched to their various destination, the Special Assistant to the Governor on Students Matters, Mr Moses Ademiloye said the free bus initiative was at the instance of Governor Fayemi who observed that the closure of tertiary institutions as a result of Coronavirus was making it difficult for students to transport themselves back to their destinations.

The Governor’s aide disclosed that the governor was not only providing free buses for them but also procured sanitizers for each of the students that would be boarding the vehicle.

Adesanya added that the students were not limited to State owned University alone but involved all the students from other tertiary institutions in the State including private institutions who were moving from Ekiti to other Southwest States in the Country.

He disclosed that the students were also sensitized on personal hygiene and measures on how to curb the spread of the virus.

Six personnel of the 10 Federal Road Safety Corps(FRSC) abducted by bandits on Monday are yet to gain their freedom. The Corps Public Education Officer...
Read more
Nigeria

The Federal Government of Nigeria has been urged to ensure adequate preparation before the introduction of the use of Compressed Natural Gas (CNG) by...
Read more