[dropcap]O[/dropcap]bviously, Murtala Mohammed International Airport is an  important gateway into the Federal Republic of Nigeria. And its new vehicle car park seems to be taking forever to build, a situation, which the government security agencies manning the airport have been exploiting to the embarrassment of the country.

No doubt, security agents planted at an international airport of that status are expected to be trained to act in accordance with the nation’s new national tune: “Change begins with me.”

But, honestly, it does not seem they were..

Since the new MMI Airport car park building project began some years back, airport visitors/travellers have had to park at a temporary car park located on the right hand side, a bit  far from the departure and arrival wings of the airport, which is not a convenient walking distance for travelers with luggage. 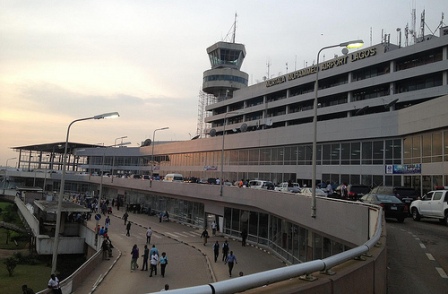 When the project started, federal government used to provide decent buses to convey travelers between the airport and the car park. But for some time now, the buses are either out of service or have reduced their operation times.

Along the roads leading into and exiting the airport are warning signboards, stating: “NO PARKING. NO WAITING. PENALTY, N50,000.”

But under the bridge leading from the departure wing is usually full of cars parked on grasses, right where cars are not supposed to park, a sight that would make a stranger think the “NO WAITING, NO PARKING” rule has either been relaxed or scrapped.  But woe betides such a driver, if he or she mistakenly joins other cars parked around the bridge, for he or she will be surrounded by security agents immediately. Negotiation will begin. Pointing at other cars parked illegally would not make sense to them.

Recently, I investigated how it works. On getting to the arrival wing, I slowed down a little bit under the bridge, and in a twinkle of an eye, an agent of the Airport security agents approached me and the following conversation ensued:

Agent: Hello sir, do you want to park?

Myself: Yes, but can I be allowed to park here?

Agent: Yes, you can see other cars. Are you picking up somebody?

Agent: Has the person arrived?

Myself: So where will I park?

Agent: Just pull up here after you pay

Myself: That’s too much

Agent: So how much do you want to pay?

To cut the long story short, the agent was ready to accept N500 for me to break the airport rule. I zoomed off.

Things like this make mockery of the federal government’s “CHANGE BEGINS WITH ME” message. Of course, N500 is meager. But what the process of collecting it and the point of collection do to the image of the country could take ages to repair. For it is happening right at the nation’s gateway.

Change does not seem to begin with the nation’s security agents at the MMI Airports, unfortunately.

Same goes for soldiers manning boundaries of various states of the federation. Travelling from Lagos, through Oyo, Osun, Ondo and Ekiti State, for instance, what you find is disgraceful. You find out that the soldiers hardly check anything. It’s God that has been protecting the country. A typical example is checkpoint at Itawure, on the way to Ekiti State. Soldiers manning the checkpoint are particular about commercial vehicles. They do not check who or what the vehicles  have on board, unless the driver fails to pay his due. They do not collect the money themselves. But just as it happens at MMI Airport, the boundary security agents have their agents too.

Quite sad, they make use of a teenager, who holds fried plantain. You’ll think the agent teenager approaches the driver to sell plantain. But no, holding the plantain forward, he collects money from the commercial vehicles’ driver and strays away or approaches the next one. Soldier is watching. As soon as a commercial driver fails to pay, he knows. And so he orders him to park and alight. What happens afterward is another story. God help us.

Unfortunately, the teenager is already being tutored on the way of corruption, by Nigerian soldiers. Imagine that!

It’s a national shame. With these going on, couple with custom officers embarrassing motorists around local government boundaries, instead of protecting our borders, whence the change?

It seems the slogan should rather be modified as: CHANGE BEGINS WITH ME, NOT WITH SECURITY AGENTS.”

President Buhari or acting president Yemi Oshibajo, this is a stain on the white garment of your CHANGE regime. Wash it.

Maserati writes a new chapter in its history by expanding its Trofeo collection. Following the 2018 launch of Levante Trofeo, the...
Read more
Load more
4
SHARES
FacebookTwitterSubscribe