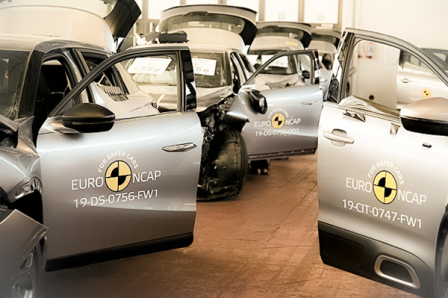 For the European Car Assessment Program (EURONCAP)  the years 2019 was one of its busiest ever.

[dropcap]I[/dropcap]n a statement released on Wednesday, the body revealed that, during the year under review, it tested Fifty-five cars, representing 26 different makes of car.

‘’Such a high number,’’ it says, ‘’ means that nearly all cars (92 percent) sold in Europe last year carried a valid Euro NCAP rating, giving consumers valuable safety guidance on almost any model they are likely to consider buying. Only three percent of new cars sold have not been rated by Euro NCAP.’’

And by implication, it means around 75 percent of the cars tested last year achieved the top five-star safety rating.

To do this against Euro NCAP’s 2019 requirements, they had to be equipped with much of the very latest crash-avoidance technology. Autonomous Emergency Braking (AEB) for car to car impacts was standard on around 90 percent of cars and optional on a further five percent; AEB to avoid pedestrian collisions was standard-fit on 85 percent of cars; and cyclist-detection, promoted by Euro NCAP only since 2018, was already standard on some 80 percent of the new cars tested. Add to that high rates of fitment of Speed Assistance and Lane Support systems and today’s cars are safer than ever, thanks to Euro NCAP’s initiatives and the car industry’s willingness to rise to the challenge.

Indeed, Euro NCAP and the European car market are leading the way, with faster adoption of safety equipment compared to many other parts of the world. As the revised General Safety Regulation (GSR) comes into effect from 2022 onwards, several new safety features will become mandatory. Last year’s results show that many of these technologies are already widely fitted on passenger cars as a result of Euro NCAP’s demanding requirements over the last few years.

EutoNCAP is not stopping there, as it views 2020 as a year that would bring in new tests for crash safety and crash avoidance and, for the first time, for post-crash survival, with cars rewarded for features that allow for safe and rapid rescue of occupants.

‘’Euro NCAP will encourage car manufacturers to continue to offer the highest levels of safety to their customers and ensure that consumers can rely on its ratings for the best safety advice,’’ it added.