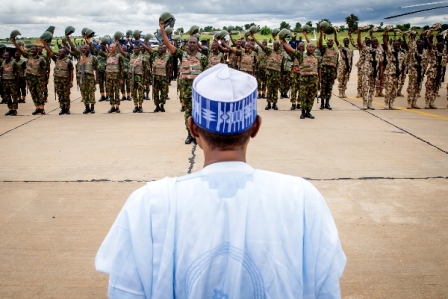 In his determination to rid Nigeria of bandits, President Muhammadu Buhari has approved the meetings between security and defence officials from Nigeria and neighbouring Niger Republic for joint operations that will sweep the forests.

Buhari also gave a firm instruction to the new Acting Inspector General of Police, Mr. Adamu Mohammed, to quickly bring on board joint operations that would rid the country of all forms of criminal activities.

Irked by the latest attacks by bandits in Sokoto state, has described killings as “utterly evil, callous, reckless, thoughtless and reprehensible”.

Reports say that no fewer than 30 persons had been killed in the attack which took place in Gandi District of Rabah Local government.

The President assured the people of Sokoto and other areas affected by banditry that his administration’s commitment to security “remains undiminished and efforts are being made to improve intelligence gathering and rapid emergency response strategies”.

“Let me reassure the people of Sokoto State and other parts of the country facing security challenges that no citizen will be abandoned to their fate.

“Security occupies the centre stage of my administration’s policies, and this commitment is being pursued with more vigour as we make efforts to provide more equipment to our security personnel to enable them perform the task effectively.’’

In a statement by his Senior Special Assistant on Media and Publicity, Malam Garba Shehu, in Abuja on Tuesday, Buhari expressed shock and sadness by the latest violence in the state.

According to him, the persistent killing of innocent and defenceless villagers by murderous thugs is unacceptable.

“My administration is leaving no stone unturned to track down these mass murderers and bring them to justice,’’ he said.

The Federal Government has approved the reorganization of the Nigeria Police with the creation of an additional department, five Zonal Commands...
Read more
CRIME&SECURITY

Following the recent lock-down of most states of the federation, millions of individuals are jobless and so having a hard time,...
Read more
CRIME&SECURITY

The police in Lagos have arrested one Sheriff Balogun, 35, for allegedly killing his neighbour, Mr Peter Elebo, over an altercation over the locking...
Read more

The Lagos State Deputy Governor, Dr Obafemi Hamzat has said the construction of Fourth Mainland Bridge will start in the first...
Read more

Hyundai Motor Company and Sony Pictures Entertainment today announced they have entered into a unique and unprecedented multi-picture promotional partnership that will feature the automaker’s new models and...
Read more
Load more